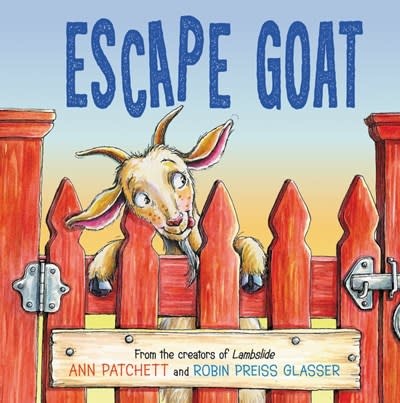 Another hilarious picture book from Lambslide creators, Ann Patchett and Robin Preiss Glasser, follows a plucky goat who continuously escapes the pen and gets blamed for mischief.

The Farmer family owns a curious goat who keeps escaping from its pen. Each and every time the goat escapes, something around the farm goes wrong, and Mr. Farmer raises the gate higher.

However, Nicolette notices that the “escape goat” is really being used as a scapegoat by the rest of the Farmer family, taking the blame for everyone else’s mischief. In her signature clever way, it is up to Nicolette to convince Mr. Farmer of the goat’s innocence.

Ann Patchett is the author of eight novels and three works of nonfiction. She is the winner of the PEN/Faulkner Award, England’s Orange Prize, and the Book Sense Book of the Year, and was named one of Time magazine’s 100 Most Influential People in the World. Her work has been translated into more than thirty languages. Ann has written about many things, but by far, she has had the most fun writing books for children. She is the co-owner of Parnassus Books in Nashville, Tennessee, where she lives with her husband, Karl, and their dog, Sparky. You can visit her at annpatchett.com.Robin Preiss Glasser has illustrated many children’s books, including the bestselling Fancy Nancy; Fancy Nancy and the Posh Puppy; Fancy Nancy: Bonjour, Butterfly; and Fancy Nancy: Splendiferous Christmas by Jane O’Connor. She is also the illustrator of America: A Patriotic Primer by Lynne Cheney. She lives in Southern California with her family.