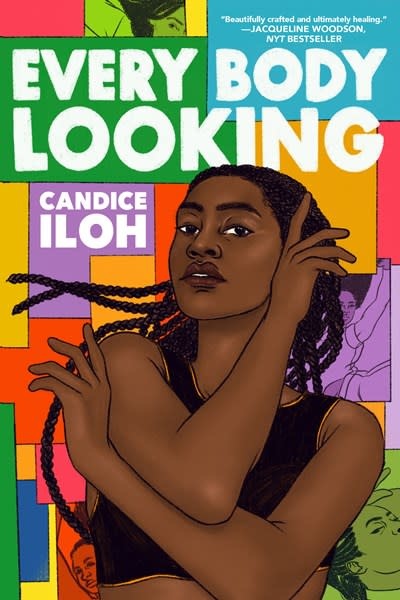 Every Body Looking is a debut novel in verse in the style of Elizabeth Acevedo and Jason Reynolds. Candice Iloh’s book tells the story of Ada—daughter of an immigrant father and an African American mother—and her struggle to find a place for herself in America and in her own family.

“This is a story about the sometimes toxic and heavy expectations set on the backs of first generation children, the pressures woven into the family dynamic, culturally and socially. About childhood secrets with sharp teeth. And ultimately, about a liberation that taunts every young person.”—New York Times bestselling author Jason Reynolds

Every Body Looking is a novel of a young woman’s struggle to carve a place for herself—for her black female body—in a world of deeply conflicting messages.

Told entirely in verse, Ada’s story encompasses her earliest memories as a child, including her abuse at the hands of a young cousin, her mother’s rejection and descent into addiction, and her father’s attempts to create a home for his American daughter more like the one he knew in Nigeria.

The present-tense of the book is Ada’s first year at Howard University in Washington DC, where she must finally confront the fundamental conflict between who her family says she should be and what her body tells her she must be.

Candice Iloh is a first generation Nigerian-American writer, teaching artist, and youth educator. She has performed her work around the country, most notably at Nuyorican Poets Café in New York City, the Women in Poetry & Hip Hop celebration at the Reginald F. Lewis Museum in Baltimore (where she performed as Nikki Giovanni), and as part of the Africa In Motion performing arts series at the National Museum of African Art in Washington, DC. She is a graduate of Howard University and holds an MFA in writing from Lesley University. Her work has earned fellowships from Lambda Literary and VONA among many others. This is her first novel. www.becomher.com