Home » Every Good Boy Does Fine: A Love Story, in Music Lessons [Memoir] 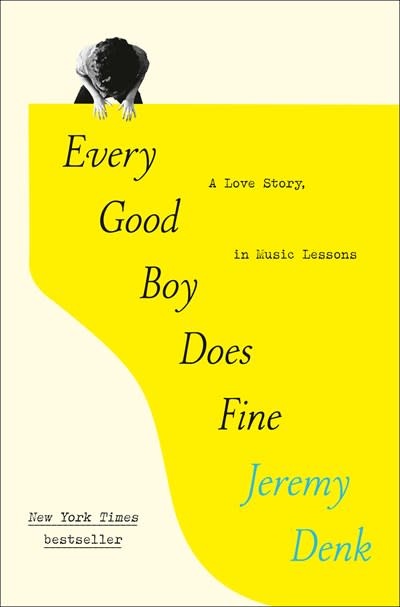 Every Good Boy Does Fine: A Love Story, in Music Lessons [Memoir]

A memoir that is also an immersive exploration of classical music—its power, its meaning, and what it can teach us about ourselves—from the MacArthur "Genius" Grant-winning pianist

In Every Good Boy Does Fine, renowned pianist Jeremy Denk traces an implausible artistic journey. Life is difficult enough as a precocious, temperamental (and possibly insufferable) six-year-old piano prodigy in a small town in New Jersey. But then a family meltdown forces a move to New Mexico, far from classical music’s nerve centers, and Denk has to please a new taskmaster while navigating the perils of junior high school. Escaping to college in Ohio at sixteen, he meets a bewildering cast of music teachers, experiences a series of triumphs and humiliations, and ultimately finds his way as one of the world’s greatest living pianists, a MacArthur “Genius,” and a frequent performer at Carnegie Hall.

There are few writers capable of so deeply illuminating the joys and miseries of artistic practice -- the hours of daily repetition, the mystifying early advice, and the pressure from parents and teachers who drove him on in the ongoing battle between talent and its two natural enemies: boredom and insecurity. As Denk introduces us to his various instructors, with their cruel and kind streaks, he is also, subtly and brilliantly, composing a love letter to the act of teaching. “The performer has two tasks,” he writes. “One is to do what’s written in the score—incredibly important—and the other, even more important, is to do everything that’s not.”

In lively, endlessly imaginative prose, Denk explains how classical music is relevant to “real life,” despite its formalities and its distance in time. He dives deeply into the pieces and composers that have shaped him—Bach, Mozart, Schubert, Beethoven, and Brahms, among others—and offers lessons on melody, harmony, and rhythm. Why, he asks, does music have such a visceral effect on us? And how can a series of notes, arranged on a page, move us so profoundly?

In Every Good Boy Does Fine, Denk sets out to relay the most meaningful lessons he has received, and to repay the debt of all his teachers. He also reminds us that music is our creation, and that we must never stop asking questions about its purpose.

Jeremy Denk is one of America's foremost pianists. Winner of a MacArthur "Genius" Fellowship and the Avery Fisher Prize, Denk is a member of the American Academy of Arts and Sciences. His recordings have reached No. 1 on the Billboard classical charts and featured on many "best of the year" lists. His writing has appeared in The New Yorker, The New Republic, The Guardian, and The New York Times Book Review. Denk graduated from Oberlin College, Indiana University, and the Juilliard School. He lives in New York City.