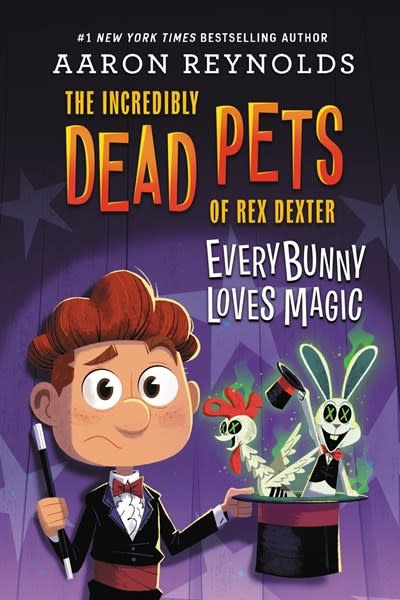 My name is Rex Dexter.

Yes. THAT Rex Dexter. The one cursed with the ability to see and talk to dead animals. The solver of atrocities against the four-footed. The savior of the flipper-finned. Save your standing ovation for later, because I have bigger things on my mind.

And not just anybunny. This particular gaggle once belonged to Booper the Mystical, Middling Falls’ foremost birthday party magician. A bedroom full of recently deceased bunnies is enough to give anyone a chronic case of the heebie-jeebies. But it gets worse. Because before long, dead doves start showing up by the flockful.

One thing quickly becomes clear…somebunny hates magic. Whoever it is, they’re attempting to put Booper the Mystical out of the birthday biz for good. And they’re willing to kill to do it.

It’s a cold cruel world out there. But don’t worry. I’m on the case. And so is Darvish. Also, Sami Mulpepper. (Don’t ask.) The point is, nobunny pulls one over on Rex Dexter…and his best friend…and his maybe-girlfriend…and his dead chicken.

Aaron Reynolds is a New York Times bestselling author and has written many highly acclaimed books for kids, including DUDE!, Creepy Pair of Underwear, Caveboy Dave, the Caldecott Honor-winning Creepy Carrots, and the Incredibly Dead Pets of Rex Dexter series. Aaron lives in Chicago with his wife, two kids, four cats, and anywhere between zero and ten goldfish, depending on the day.