Home » Everyone in This Room Will Someday Be Dead: A novel 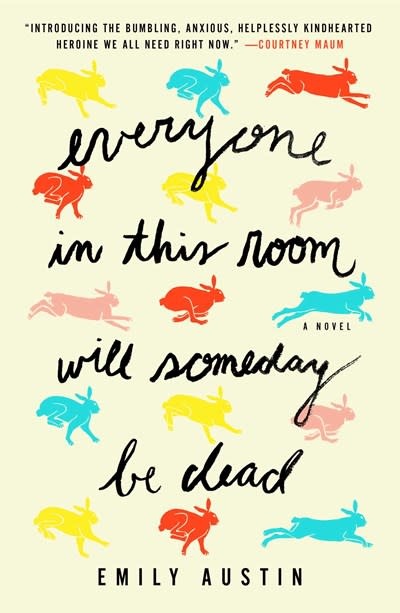 Everyone in This Room Will Someday Be Dead: A novel

This hilarious and profound debut for fans of Mostly Dead Things and Goodbye, Vitamin, follows a morbidly anxious young woman—“the kindhearted heroine we all need right now” (Courtney Maum, New York Times bestselling author)—who stumbles into a job as a receptionist at a Catholic church and becomes obsessed with her predecessor’s mysterious death.

Gilda, a twenty-something, atheist, animal-loving lesbian, cannot stop ruminating about death. Desperate for relief from her panicky mind and alienated from her repressive family, she responds to a flyer for free therapy at a local Catholic church, and finds herself being greeted by Father Jeff, who assumes she’s there for a job interview. Too embarrassed to correct him, Gilda is abruptly hired to replace the recently deceased receptionist Grace.

In between trying to memorize the lines to Catholic mass, hiding the fact that she has a new girlfriend, and erecting a dirty dish tower in her crumbling apartment, Gilda strikes up an email correspondence with Grace’s old friend. She can’t bear to ignore the kindly old woman, who has been trying to reach her friend through the church inbox, but she also can’t bring herself to break the bad news. Desperate, she begins impersonating Grace via email. But when the police discover suspicious circumstances surrounding Grace’s death, Gilda may have to finally reveal the truth of her mortifying existence.

A delightful blend of warmth, deadpan humor, and pitch-perfect observations about the human condition, Everyone in This Room Will Someday Be Dead is a crackling exploration of what it takes to stay afloat in a world where your expiration—and the expiration of those you love—is the only certainty.

Emily R. Austin was born in Ontario, Canada, and received a writing grant from the Canadian Council for the Arts in 2020. She studied English literature and library science at Western University. She currently lives in Ottawa. Everyone in This Room Will Someday Be Dead is her first novel.