Home » Everything Comes Next 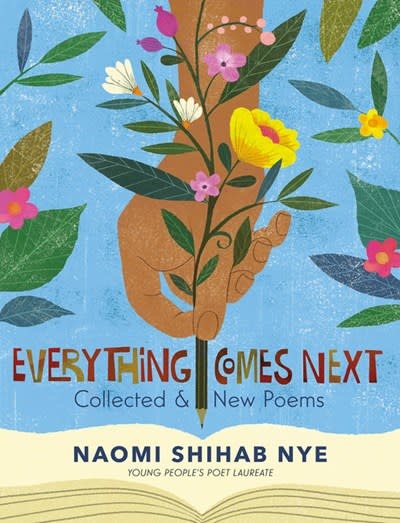 This celebratory book collects in one volume beloved and acclaimed poet Naomi Shihab Nye’s most popular and accessible poems from the past forty years. Also features new, never-before-published poems, an introduction by bestselling poet and author Edward Hirsch as well as a foreword and writing tips by the poet, and a stunning jacket and interior spot art by bestselling artist Rafael López. In a starred review, Kirkus Reviews calls Everything Comes Next “emotionally resonant and stirring.” Everything Comes Next is essential for poetry readers, classroom teachers, and library collections.

Everything Comes Next is a treasure chest of Naomi Shihab Nye’s most beloved poems, including favorites such as “Famous,” “A Valentine for Ernest Mann,” and the widely shared “Kindness” and “Gate A-4.” This collection, which also includes new poems, will serve as an introduction to the poet’s work for new readers as well as a comprehensive edition for classroom and family sharing.

Naomi Shihab Nye was born in St. Louis, Missouri. Her father was a Palestinian refugee and her mother an American of German and Swiss descent, and she spent her adolescence in both Jerusalem and San Antonio, Texas. She earned her BA from Trinity University in San Antonio. Naomi Shihab Nye is the recipient of numerous honors and awards for her work, including the Ivan Sandrof Award for Lifetime Achievement from the National Book Critics Circle, the Lavan Award, the Paterson Poetry Prize, the Carity Randall Prize, the Isabella Gardner Poetry Award, the Lee Bennett Hopkins Poetry Award, the Robert Creeley Prize, and many Pushcart Prizes. She was elected to the American Academy of Arts & Sciences and has received fellowships from the Lannan Foundation, the Guggenheim Foundation, and she was a Witter Bynner Fellow. From 2010 to 2015 she served as a Chancellor of the Academy of American Poets. In 2018 she was awarded the Lon Tinkle Award for Lifetime Achievement from the Texas Institute of Letters.Naomi Shihab Nye is the author and/or editor of more than 30 volumes. Her books of poetry include Everything Comes Next: Collected & New Poems, Cast Away: Poems for Our Time, Voices in the Air, Honeybee, 19 Varieties of Gazelle: Poems of the Middle East, A Maze Me: Poems for Girls, The Tiny Journalist, Red Suitcase, Words Under the Words, Fuel, and You & Yours (a bestselling poetry book of 2006). Her middle grade novel The Turtle of Michigan is the stand-alone companion to The Turtle of Oman, winner of the Middle East Book Award. Naomi Shihab Nye lives in San Antonio, Texas.