Home » F Is for Fairy Tale 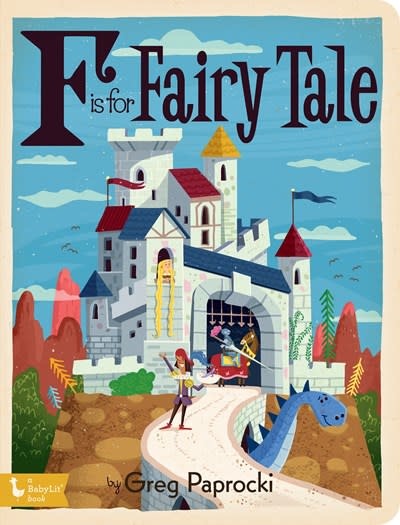 F Is for Fairy Tale

Introduce your toddler to classic fairy tales with this colorful alphabet primer, from the creators of BabyLit.

An engaging collection of 26 illustrations featuring many different fairy tales and fairy tale objects—such as Castle, for Cinderella; Lamp, for Aladdin; Tower, for Rapunzel; and Red Roses, for Alice in Wonderland. Teach your little ones to be just like a fairy tale hero with words such as Brave, for the brave little goat in Three Billy Goats Gruff; Fearless, for small Thumbelina who floats down a river; and Mighty, for the mighty little boy who pulls a sword from a stone. Illustrator Greg Paprocki’s popular BabyLit alphabet board books feature his classically retro midcentury art style that’s proven to be a hit with both toddlers and adults.

Greg Paprocki works full-time as an illustrator and book designer. He has illustrated several Curious George books, the Little Leonardo series, and the BabyLit alphabet board books including are S Is for Santa, B Is for Boo, and E Is for Easter. He lives in Lincoln, Nebraska.

Greg Paprocki is an award-winning lifestyle, commercial, and portrait animal photographer. He is active in animal rescue and advocacy for pit bull-type dogs. Greg is the photographer behind Peanut Butter Dogs, a rollicking portrait collection of more than 140 dogs enjoying peanut butter, and Pit Bull Heroes: 49 Underdogs with Resilience & Heart, which spotlights forty-nine underdogs who beat the odds and became heroes in their families, neighborhoods, and communities. His work has been featured in Huffington Post, Today, Daily Mail, Elle, People, and other media outlets throughout the world. Greg lives near Cleveland, Ohio, with his wife, Kristen, daughter, Evie, and two rescue dogs, Leo and Kensie.