Home » Fantastic Tales of Nothing 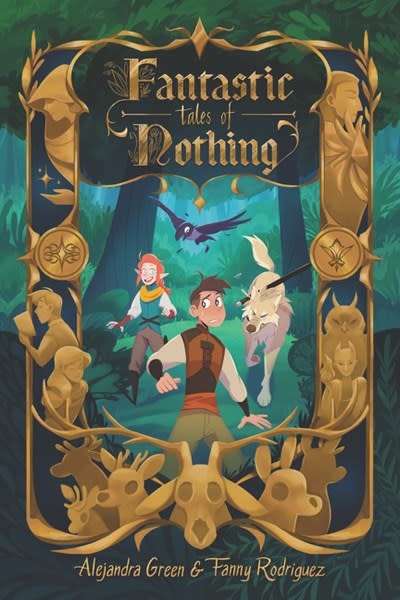 Fantastic Tales of Nothing

In the first book of this full-color fantasy graphic novel series filled with humor and hijinks, the fate of the land of Nothing hinges on Nathan and an unlikely team of magical beings to save the day—perfect for fans of Amulet and Estranged.

Welcome to Nothing! Despite its name, this is a fantastic land where humans and magical volken coexist peacefully—at least they try to coexist . . .This is the tale of Nathan, an ordinary human (or so he thinks) living an ordinary life (or so he wishes). Everything changes when he wakes up in the middle of nowhere and meets Haven, a mysterious creature who is neither human nor volken. Oh, and the two of them are being chased by volken mercenaries—a grumpy wolf named Bardou and a delightful crow named Sina.Nathan soon learns he has mysterious powers inside him, even though humans aren’t supposed to have magic (just Nathan’s luck). But there’s no time to dwell on that because this discovery sets the group on a perilous quest across windswept terrain, through haunted forests, and in ancient tombs. With the fate of Nothing resting on Nathan’s shoulders, he and his unlikely friends must prevent an impending war and defeat a dark evil to save their land. No pressure, of course. If they fail, everything will turn into, well . . . nothing.

Alejandra “Ale” Green is an artist from San José del Cabo, Baja California Sur, Mexico. She has worked at a local animation studio, ranging from visual development to 2D animation. She’s also been a concept artist for video game companies such as EA, Bioware, Zynga, and more. Ale is currently a freelance illustrator and comic artist living in Monterrey, Nuevo León, with her fiancée and rescued pets. You can visit her online at www.talesofnothing.com/en.Fanny Rodriguez is an artist and writer from Monterrey, Nuevo León, Mexico. She worked as a web and UI designer for several years before becoming a concept artist and team leader for an outsourcing video game studio, supervising and creating assets for projects by EA, Bioware, Zynga, and more. She is now a freelance illustrator developing new stories for comics. Fanny lives with her spouse, dogs Mila and Sophie, and their ancient chinchilla. You can visit her online at www.talesofnothing.com/en.