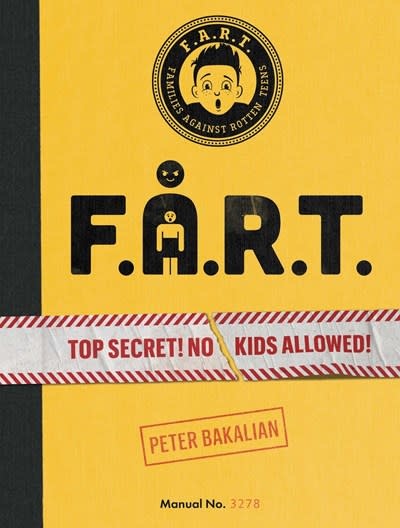 When a young teen discovers a top-secret parenting manual, it’s kids versus grown-ups in this kooky, illustrated middle grade thriller with nonstop, seat-of-your-pants action that will delight fans of Jarrett Lerner and Stuart Gibbs.

When a tween boy [Codename: Furious Popcorn] picks up what he thinks is a cookbook and finds a diabolical parenting manual, his world turns upside down. The Ultimate Guide to Hacking Your Kids was written by an organization called F.A.R.T. (Families Against Rotten Teens), a secret society of grizzled parents whose origins date back to antiquity.

FP is determined to get to the bottom of this, but when he begins investigating F.A.R.T., the manual goes missing, his parents deny knowing anything about any kind of book, and—maybe strangest of all—kids at school start listening to their parents and teachers. What kid would ever do that?

F.A.R.T. proves to be more than just some gassy acronym and parental rules and regulations when FP and the Only Onlys, his best friends since preschool, discover F.A.R.T.’s grand plan: a brain modem that can turn kids into well-behaved zombies!

This wacky crew has no choice but to find out who’s behind the nefarious organization and save young people the world over from total F.A.R.T. domination!

After starting as an intern at Walt Disney Studios, Peter Bakalian joined the production team for Rankin/Bass’s ThunderCats and later earned Emmy recognition for his writing on Curious George. He was also nominated along with Suzanne Collins for Best Animated Screenplay by the Writers Guild of America for the Fox musical special Santa, Baby! which he also produced. His work has also appeared on the BBC series Big & Small and Scholastic’s Clifford’s Puppy Days. F.A.R.T. is his first novel. He lives in Bradley Beach, New Jersey.