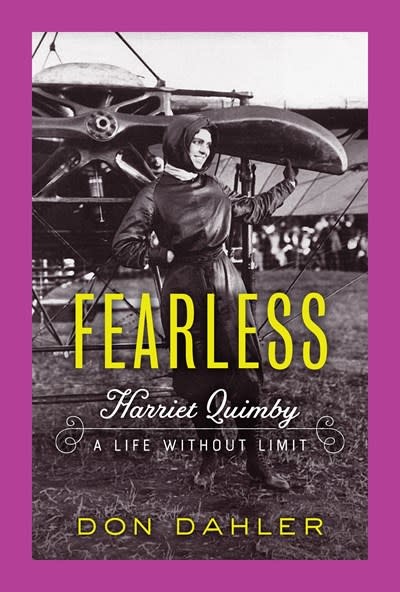 In the spirit of the bestseller Fly Girls comes the definitive and compelling true story of Harriet Quimby, the first American woman to receive a pilot's license.

In the early twentieth century, headlines declared that "the era of women has dawned." Against this changing historical backdrop, Harriet Quimby's extraordinary life stands out as the embodiment of this tumultuous, exciting era—when flight was measured in minutes, not miles.

This untold piece of feminist history unveils Quimby's incredible story: rising from humble beginnings as a dirt-poor farm girl to become a globe-trotting journalist, history-making aviator, and international celebrity. With her tragic death in 1912 at the age of thirty-seven, her story faded, with her many accomplishments—the first woman to fly solo over the English Channel among them—overshadowed by major events, including the sinking of the Titanic.

With black and white illustrations throughout, Fearless is the definitive biography of the first licensed female American pilot: one of the most inspiring hidden figures of history.

Don Dahler is a former correspondent for ABC and CBS and has received every major award for broadcast journalism, including two national Emmy Awards, two Edward R. Murrow Awards a Peabody Award and an Alfred I. duPont-Columbia Award. A lifelong aviation buff and the son of an Air Force officer, Dahler lives with his family in New Jersey.