Ages 6 to 10
Dynamic duo Andy Griffiths and Terry Denton are back for the sixth installment in their New York Times—bestselling chapter book series, filled with their signature slapstick humor!

Andy and Terry live in a 78-story treehouse. (It used to be a 65-story treehouse, but they just keep building more levels!) It has a drive-thru car wash, a courtroom with a robot judge called Edward Gavelhead, a scribbletorium, a combining machine, an ALL-BALL sports stadium, a high-security potato chip storage facility, and an open-air movie theatre with a super-giant screen . . . which is a very useful thing to have now that Terry’s going to be a big-shot movie star!

After Andy gets cut out of the movie, he and Terry have a big fight and decide they don’t want to be best friends anymore. But with a herd of sneaky spy cows out to steal all their story ideas, can Andy and Terry make up before it’s too late? 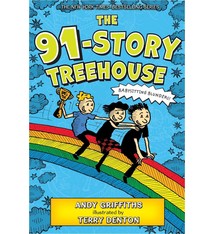