Home » Felice and the Wailing Woman 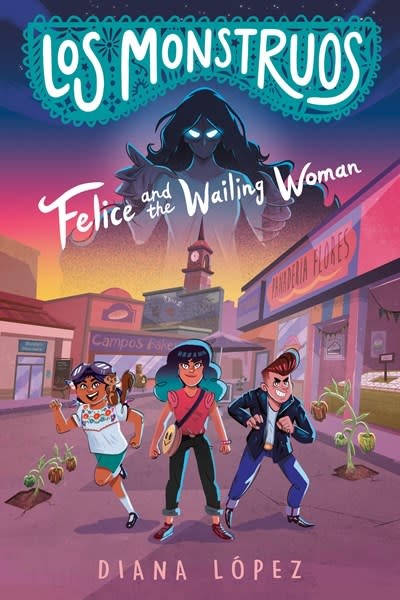 Felice and the Wailing Woman

The twelve-year-old daughter of La Llorona vows to free her mother and reverse the curses that have plagued the magical town of Tres Leches in this delightfully sweet and spellbinding adventure by beloved author Diana López.

When Felice learns that she’s the daughter of La Llorona, she catches a ride to the magical town of Tres Leches, where her mother is said to be haunting the river. Growing up with her uncle Clem in Corpus Christi, Felice knew that she had been rescued from drowning—it’s where her intense fear of water comes from—but she had no idea her mother remained trapped between worlds, looking for her. Guided by the magical town’s eccentric mayor, Felice vows to help her mother make peace with the events that turned her into the most famous monstruo of US–Mexico border lore. Along the way, she meets the children of other monstruos, like La Lechuza and the Dancing Devil, and together they free Tres Leches from magical and metaphorical curses that have haunted its people for generations.

Diana López’s electric return to middle grade—the first in a series—brims with magic, adventure, and Mexican folklore, and is perfect for fans of Ghost Squad by Claribel Ortega and the Jumbies series by Tracey Baptiste.

Diana López is the author of the adult novella Sofia's Saints and numerous middle grade novels, including Confetti Girl, Nothing Up My Sleeve, and Lucky Luna. Her debut picture book, Sing With Me: The Story of Selena Quintanilla, is available in English and Spanish. She also wrote the novel adaptation for the Disney/Pixar film Coco. Diana retired after a 28-year career in education at both the middle grade and college levels, but she still enjoys meeting with students when she visits schools to chat about books and writing. She lives in her hometown of Corpus Christi, Texas.