Home » Fen, Bog and Swamp: A Short History of Peatland Destruction & Its Role in the Climate Crisis 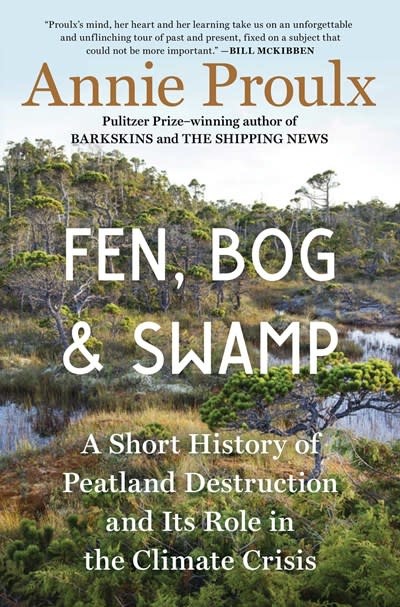 Fen, Bog and Swamp: A Short History of Peatland Destruction & Its Role in the Climate Crisis

From Pulitzer Prize winner Annie Proulx—whose novels are infused with her knowledge and deep concern for the earth—comes a riveting, revelatory history of our wetlands, their ecological role, and what their systematic destruction means for the planet.

A lifelong environmentalist, Annie Proulx brings her wide-ranging research and scholarship to the subject of wetlands and the vitally important yet little understood role they play in preserving the environment—by storing the carbon emissions that greatly contribute to climate change. Fens, bogs, swamps, and marine estuaries are the earth’s most desirable and dependable resources, and in four stunning parts, Proulx documents the long-misunderstood role of these wetlands in saving the planet.

Taking us on a fascinating journey through history, Proulx shows us the fens of 16th-century England to Canada’s Hudson Bay lowlands, Russia’s Great Vasyugan Mire, America’s Okeefenokee National Wildlife Refuge, and the 19th-century explorers who began the destruction of the Amazon rainforest. Along the way, she writes of the diseases spawned in the wetlands—the Ague, malaria, Marsh Fever—and the surprisingly significant role of peat in industrialization.

A sobering look at the degradation of wetlands over centuries and the serious ecological consequences, this is a stunningly important work and a rousing call to action by a writer whose passionate devotion to understanding and preserving the environment is on full and glorious display.

Annie Proulx is the author of nine books, including the novels The Shipping News and Barkskins, and the story collection Close Range. Her many honors include a Pulitzer Prize, a National Book Award, the Irish Times International Fiction Prize, and a PEN/Faulkner award. Her story “Brokeback Mountain,” which originally appeared in The New Yorker, was made into an Academy Award–winning film. Fen, Bog, and Swamp is her second work of nonfiction. She lives in New Hampshire.