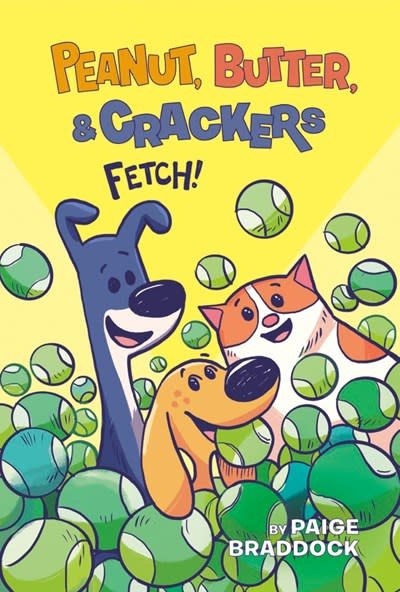 Peanut, Butter, and Crackers are back in this hilarious follow-up to Puppy Problems, continuing a graphic novel series for early readers.

Floppy-eared Peanut is off to doggy school to learn how to be a good dog! Sure, he’s excited, but when he gets separated from Crackers, he quickly realizes that he has to fend for himself. Five minutes in and he’s already the new target of the Pint-Sized Pack, the bullies of the Little Dogs group. He knows that Crackers and Butter can’t help him, so what use is there in telling them he feels alone without his family?

Kids will love Paige Braddock’s hilarious follow-up to Puppy Problems. This story of found family and teamwork is sure to strike a chord with young readers everywhere.

Series Overview: Fetch! is the second of three books in the Peanut, Butter, & Crackers graphic novel series for young readers. Book 3 is scheduled for Spring 2022.

Paige Braddock is the Eisner-nominated creator of Jane’s World, the first gay-themed comic work to be nationally syndicated online. A twentieth anniversary anthology of the groundbreaking comic was a Lambda Literary Award finalist. She is also the chief creative officer at Charles M. Schulz Creative Associates and has illustrated several Peanuts children’s books. Her other graphic novels for children include the Stinky Cecil series (Andrews McMeel).