Home » Fight of the Century: Alice Paul Battles Woodrow Wilson for the Vote 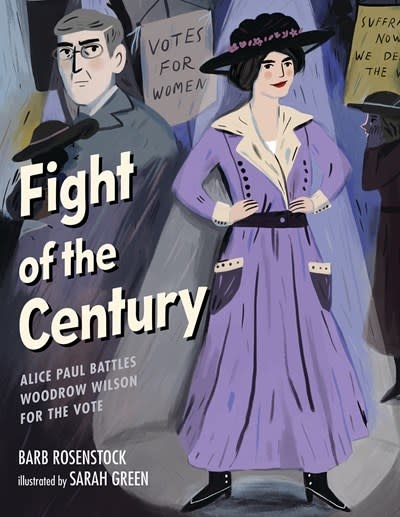 Fight of the Century: Alice Paul Battles Woodrow Wilson for the Vote

The fight for women’s suffrage between women’s rights leader Alice Paul and President Woodrow Wilson is creatively presented as a four-round boxing match in this energetic nonfiction picture book.

When Woodrow Wilson was elected President, he didn’t know that he would be participating in one of the greatest fights of the century: the battle for women’s right to vote. The formidable Alice Paul led the women’s suffrage movement, and saw President Wilson’s election as an opportunity to win the vote to women. She battered her opponent with endless strategic arguments and carefully coordinated protests, calling for a new amendment granting women the right to vote. With a spirit and determination that never quit—even when peaceful protests were met with violence and even when many women were thrown in jail—Paul eventually convinced President Wilson to support her cause, changing the country forever. Cleverly framed as a boxing match, this book provides a fascinating and compelling look at an important moment in American history. Sarah Green’s bright, detailed illustrations perfectly accompany award-winning author Barb Rosenstock’s captivating narrative.

Barb Rosenstock is the award-winning author of many picture-book biographies for Calkins Creek. Her picture book on Vasily Kandinsky, The Noisy Paint Box, was a 2015 Caldecott Honor book. Visit barbrosenstock.com.

Sarah Green is a RISD-educated illustrator and designer born and based in San Francisco. She is the illustrator of numerous picture books, including Dorothea Lange: The Photographer Who Found the Faces of the Depression by Carole Boston Weatherford and Elizabeth Warren: Nevertheless She Persisted by Susan Wood. Visit sarahgreenillustration.com.