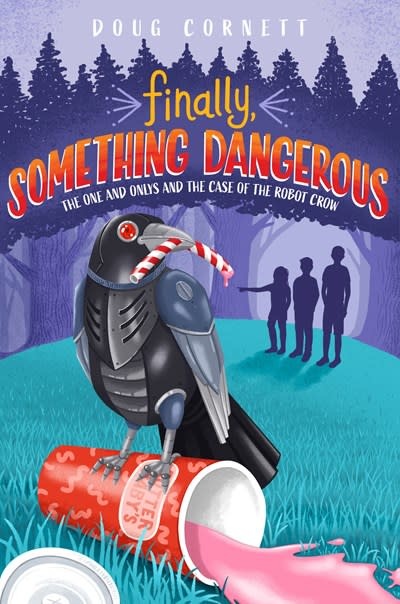 The mystery-solving trio, the One and Onlys, from Finally, Something Mysterious is back with another whodunit. Robot crows, a poetry-slash-wrestling Club, and a hamster infestation? This looks like another case to tackle!

As the excitement from the last mystery the One and Onlys solved is starting to dwindle, Shanks, Peephole, and Paul worry that their town is back to being boring old Bellwood. But as plans for a shiny town makeover get underway, they realize that the "old Bellwood" is anything but.

The glee over "New Bellwood" is palpable, and it's hard not to get swept away by the flashy new milkshake joint and other developments that are quickly making their small town unrecognizable. But the One and Onlys can't deny that something nefarious seems to be afoot--especially if the robot crow they stumbled upon is any indication.

Strange? Yes. Dangerous? Hopefully! Shanks doesn’t know how these things are connected, but she’s determined to find out—with the help of the One and Onlys.

Series Overview: Shanks, Paul, and Peephole are the best friends and (formerly) only children who solve mysteries in their small town as the One and Onlys!

Doug Cornett received his MFA from Portland State University and in 2016 was awarded first prize for the William Van Dyke Short Story Contest from Ruminate Magazine. He is also the author of Finally, Something Mysterious. He lives in Ohio with his family. Follow him on Twitter at @MrDougCornett.