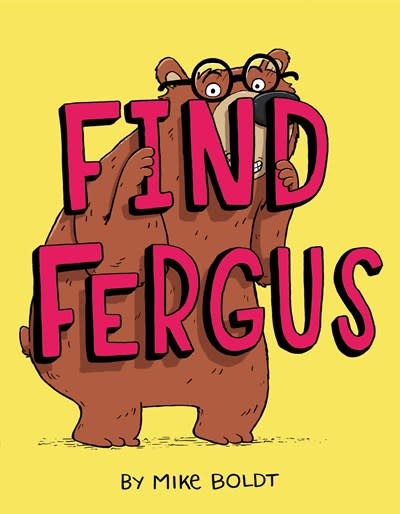 “Think of it as a Where’s Waldo? book if Waldo were really, really bad at hiding.” - author/illustrator Mike Boldt’s pitch for Find Fergus.

The hilarious mind behind I Don’t Want to Be a Frog and Bad Dog brings picture book fans the super-funny, interactive story of Fergus the bear, who loves to play hide-and-seek with the reader…but can’t really seem to get the hang of it.

Children will giggle from start to finish as they follow huge, loveable Fergus and see all the silly ways in which he is TERRIBLE at playing hide-and-seek—such as hiding behind a VERY tiny tree (“Found you, Fergus! That was too easy!”) or hiding in a giant crowd of bunnies and squirrels (“Try bears, Fergus. Bears!”).

But wait—the game isn’t over yet! The last two pages fold out into a giant panoramic look-and-find scene, where Fergus is well and truly hidden, and young readers can have fun looking for him and lots of other silly details in the the crowd. There’s a ton of play value in this adorable book, and children will want to come back to it again and again.

Fergus wants to play hide and seek. But, look, there he is, hiding right in the middle of a big blank page!

“Found you, Fergus! That was too easy. Try hiding behind something.” (Giant, furry Fergus hides behind a very tiny tree.)

“Oh, Fergus. Start by hiding in a crowd.” (Fergus hides next to duck and a fox, who don’t seem impressed.)

“A crowd is more than THREE, Fergus!”

MIKE BOLDT is an author and illustrator living in the countryside of Alberta, Canada. He is the illustrator of the picture book I Don’t Want to Be a Frog and its sequels and the author/illustrator of Bad Dog. When he’s not creating picture books, he’s building snow forts and Lego spaceships with his three kids, or sharing laughs and his ice cream with his wife. Visit Mike online at mikeboldt.ca and on Twitter at @MikeBoldt.