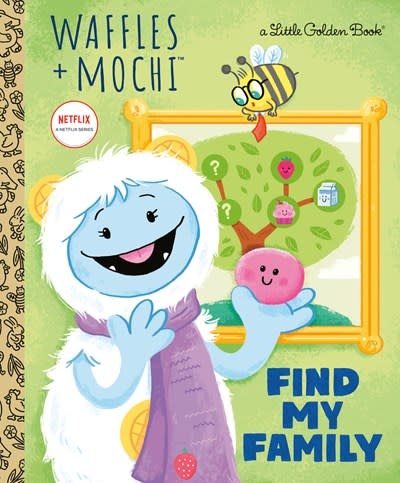 Learn about family, fun, and food in an all-new Little Golden Book based on Netflix’s Waffles + Mochi, a children’s show from President Barack and Michelle Obama’s production company, Higher Ground!

Who are Mochi’s ancestors? Join Waffles as she helps her best friend trace his family tree. It’s a journey that takes them on a food-filled adventure around the world and reveals the different forms family can take. Boys and girls ages 2 to 5 who love Netflix’s new show about friendship and adventurous eating will love this all-new Little Golden Book.

Join Waffles and Mochi for global adventures that reveal the stories behind our food. Produced by President Barack and Michelle Obama’s Higher Ground and streaming on Netflix, Waffles + Mochi is an entertaining mix of puppetry, animation, celebrity chefs, and famous guest stars. This delightful new show introduces young children and their families to a world of cooking and fearless eating.

Series Overview: This is the only title on the summer 2022 Waffles + Mochi list.