Home » Find Out About Animal Babies 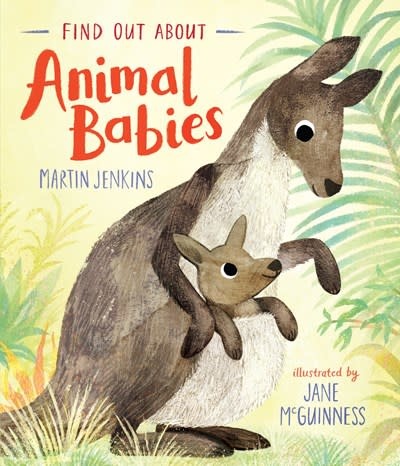 Find Out About Animal Babies

A conservation biologist looks at some of the many kinds of animal babies—and the many ways their parents take care of them—in a gentle introduction for young children.

Some animals have big babies (did you know a newborn whale weighs three tons?). And some animals have babies that are small (a new kangaroo, less than an inch long, climbs into its mother’s pouch to stay safe and warm). All animals have babies, but not all animal babies are the same, and not all animal parents are the same, either. From parents whose babies look just like them to those with no resemblance at all, from parents who raise their young in a crowd to those who do it all on their own, the range of family setups depicted here shows just how much the lives of animal babies can vary from the time they’re born. Melding a simple narration with more detailed facts on a variety of creatures from leopards to lizards, elephants to sea turtles, butterflies to chimpanzees, fish to flamingos, this fascinating picture book also offers a brief note on animal parents and babies in the back matter.

Jane McGuinness received an MA in children’s book illustration from the Cambridge School of Art in England. She is the author and illustrator of Prickly Hedgehogs!, which was her first picture book. Jane McGuinness lives in England.