Home » Finish the Fight!: ...Women Who Fought for the Right to Vote 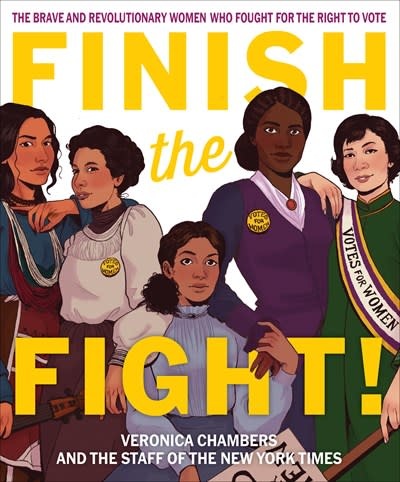 Finish the Fight!: ...Women Who Fought for the Right to Vote

Who was at the forefront of women's right to vote? We know a few famous names, like Susan B. Anthony and Elizabeth Cady Stanton, but what about so many others from diverse backgrounds—black, Asian, Latinx, Native American, and more—who helped lead the fight for suffrage? On the hundredth anniversary of the historic win for women's rights, it's time to celebrate the names and stories of the women whose stories have yet to be told.

Gorgeous portraits accompany biographies of such fierce but forgotten women as Yankton Dakota Sioux writer and advocate Zitkála-Šá, Mary Eliza Church Terrell, who cofounded the National Association of Colored Women (NACW), and Mabel Ping-Hua Lee, who, at just sixteen years old, helped lead the biggest parade in history to promote the cause of suffrage.

FINISH THE FIGHT will fit alongside important collections that tell the full story of America's fiercest women. Perfect for fans of GOOD NIGHT STORIES FOR REBEL GIRLS and BAD GIRLS THROUGHOUT HISTORY.

Veronica Chambers is the editor of Past Tense at The New York Times. She recently created the anthology "The Meaning of Michelle," a collection by 16 writers celebrating the former first lady, and edited the upcoming "Queen Bey: A Celebration of the Power and Creativity of Beyoncé Knowles-Carter." She is a prolific author, best known for her critically acclaimed memoir, Mama's Girl. Born in Panama and raised in Brooklyn, she writes often about her Afro-Latina heritage. She speaks, reads, and writes Spanish, but she is truly fluent in Spanglish. She is currently a JSK Knight fellow at Stanford University. www.veronicachambers.com, Twitter: @vvchambers, Instagram: @vvchambers