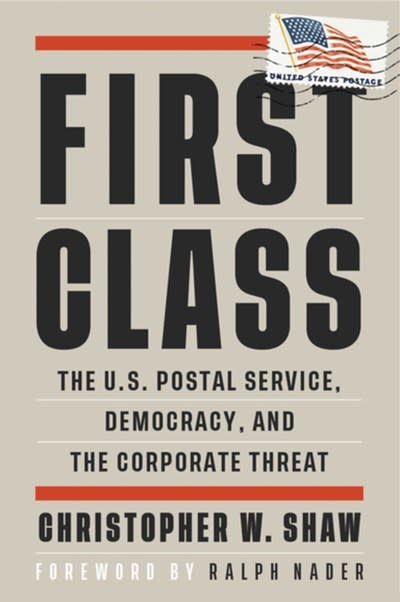 Investigating the essential role that the postal system plays in American democracy and how the corporate sector has attempted to destroy it.

Investigating the essential role that postal system plays in American democracy and how the corporate sector has attempted to destroy it.The fight over the future of the U.S. Postal Service is on. Political ideologues and corporate interests have long sought to remake the USPS from a public institution into a private business, and in 2020, during an election dependent on mail-in votes, the attacks escalated. This year, with mid-term elections fast approaching and the next presidential contest on the horizon, attempts to undermine the essential role of the USPS are gaining ground. Three states have already passed laws to limit voting by mail, with more poised to do the same. Postmaster General Louis DeJoy recently unveiled a “10-year plan” that openly promises slower delivery times, price hikes on postage, and reduced access to post offices, outlining the next stage of battle.In First Class, Christopher Shaw provides an illuminating history of the U.S. Postal Service, exposing the various campaigns against it. He argues that current attacks have implications that go beyond the future of mail service, and will have grave consequences for American democracy if they are not stopped.Praise for First Class:"Such visionary leaders like Benjamin Franklin created our universal postal service for the common good of all Americans. But—lookout America!—here comes a cabal of greedheads and boneheads to plunder and corporatize this essential public resource. Shaw's book alerts us to this thievery, and shows us how to stop it."—Jim Hightower, syndicated columnist and radio commentator“Shaw does an impressive job documenting how the Postal Service has provided a wide range of public services, going well beyond delivering the mail, for more than two centuries. This book should be essential reading for anyone who thinks that privatizing the Postal Service is a good idea, or that privatization of public services always leads to gains in efficiency.”—Dean Baker, co-founder of the Center for Economic and Policy Research and author of Rigged“Required reading for anyone who wants to understand the push to privatize the post office and why it needs to be resisted.”—Steve Hutkins, editor of Save the Post Office and Professor of English at New York University"Christopher W. Shaw's First Class: The U.S. Postal Service, Democracy, and the Corporate Threat makes a passionate but well-argued case for a healthy USPS. Shaw organizes his methodical argument around decades of attacks on the USPS; in doing so, he effectively refutes the flawed (and often anti-democratic) cases for privatization and deregulation. The USPS is essential for a democratic American society; thank goodness we have this new book from Christopher W. Shaw explaining why."—Danny Caine, author of Save the USPS and owner of the Raven Book Store, Lawrence, KS

Christopher W. Shaw is an author, historian, and policy analyst. He has a Ph.D. in History from the University of California, Berkeley, and is the author of Money, Power, and the People: The American Struggle to Make Banking Democratic (University of Chicago Press, 2019) and Preserving the People’s Post Office (Essential Books, 2006). His research on the history of banking, money, labor, agriculture, social movements, and the postal system has been published in the following academic journals: Journal of Policy History, Journal of Social History, Agricultural History, Enterprise & Society, Kansas History, and Journalism History. Shaw was formerly a project director at the Center for Study of Responsive Law. He has worked on a number of policy issues, including the privatization of government services, health and safety regulations, and electoral reform. He has appeared in such media outlets as the Associated Press, National Public Radio, Washington Post, Christian Science Monitor, New York Post,Village Voice, Philadelphia Inquirer, and Buffalo News, among others. He lives in Berkeley, CA.Named by The Atlantic as one of the hundred most influential figures in American history, and by Time and Life magazines as one of the most influential Americans of the twentieth century, Ralph Nader has helped us drive safer cars, eat healthier food, breathe better air, drink cleaner water, and work in safer environments for more than four decades. Nader was instrumental in the creation of the Occupational Safety and Health Administration (OSHA), the Environmental Protection Agency (EPA), the Consumer Product Safety Commission (CSPC), and the National Highway Transportation Safety Administration (NHTSA). Many lives have been saved by Nader's involvement in the recall of millions of unsafe consumer products, including defective motor vehicles, and in the protection of laborers and the environment. By starting dozens of citizen groups, Ralph Nader has created an atmosphere of corporate and governmental accountability. Nader's recent books include Breaking Through Power with City Lights, Unstoppable, and The Good Fight. His Animal Envy, A Parable was published by Seven Stories Press in the fall of 2016. Nader writes a syndicated column, has his own radio show, and gives lectures and interviews year round.