Home » First Principles: What America's Founders Learned from the Greeks and Romans & How That Shaped Our Country 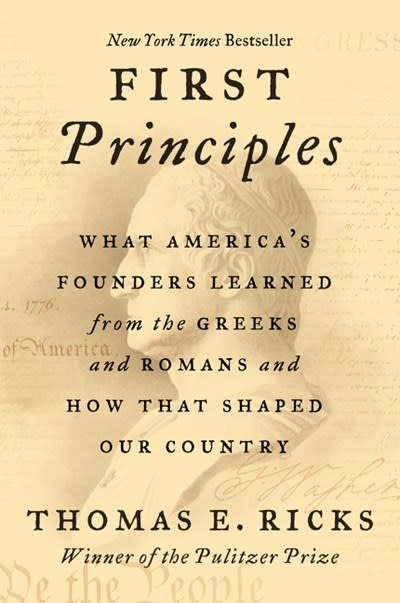 First Principles: What America's Founders Learned from the Greeks and Romans & How That Shaped Our Country

New York Times Bestseller"Ricks knocks it out of the park with this jewel of a book. On every page I learned something new. Read it every night if you want to restore your faith in our country." —James Mattis, General, U.S. Marines (ret.) & 26th Secretary of Defense “An extraordinarily timely book.”—Wall Street Journal

In First Principles, Pulitzer Prize-winning journalist and #1 New York Times bestselling author Thomas E. Ricks examines the Founding Fathers’ educations and, in particular, their devotion to the ancient Greek and Roman classics—and how that influence shaped their ideals and the new American nation.Ricks reveals how the first four American presidents came by their classical knowledge: Washington absorbed it mainly from the elite culture of his day; Adams learned it through the laws and rhetoric of Rome; Jefferson immersed himself in classical philosophy, especially Epicureanism; and Madison spent years studying the ancient world like a political scientist. Each of their experiences, and their distinctive learning styles and choices, played an essential role in the formation of the United States. First Principles follows these four members of the Revolutionary generation from youth to adulthood as they grappled with questions of independence and with forming and keeping a new nation. In doing so, Ricks not only interprets the effect of the ancient world on each man and how their classical educations shaped our Constitution and government, but also offers startling insights into these legendary leaders.