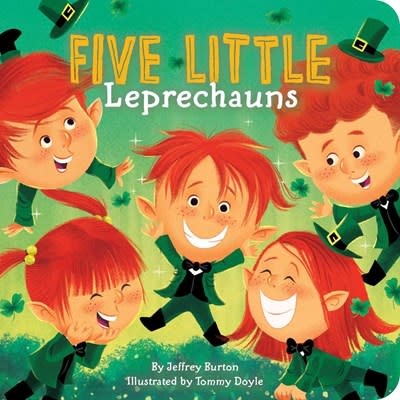 This rhythmic and energetic board book brings the classic nursery rhyme “Five Little Monkeys” to a mischievous new world!

One leaped up and then fell over.

No more leprechauns hiding in the clover.

A magical twist on “Five Little Monkeys,” little ones will love following five little leprechauns on a St. Patrick’s Day adventure as they hide in clovers and rainbows.

Jeffrey Burton has written several books for children. He lives in New York City with his family.

Tommy Doyle is an illustrator and graphic designer based in Melbourne, Australia. Originally from Montreal, he relocated down under in 2007. He has been working in the industry for over twenty years. Illustration is a big passion of his and finds that it is an effective and creative way to communicate a message or an emotion. His work is bold and rich in simplicity. Tommy loves playing with shapes and textures, mixing digital and traditional mediums.