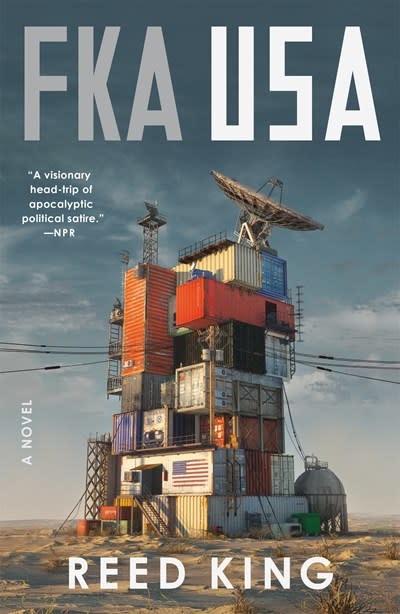 With echoes of The Hitchhiker's Guide to the Galaxy, Underground Airlines, and The Wizard of Oz, FKA USA is a dystopian tale that is a masterwork of ambition and imagination.

FKA USA is a wildly imaginative, funny, oddly prescient, and brilliantly futuristic dystopian tale with eerie contemporary relevance about a young man in 2085 who realizes the world he lives in might be its very own Emerald City.

Reed King's amazingly audacious novel imagines a final, disastrous president of the United States, whose self-interested rule provoked the splintering of the states into individual countries. The novel follows Truckee Wallace, a young man plucked from obscurity from the factory line where he works, hand-picked by the president to lead a covert mission: to bring a talking goat to the other side of the continent and hopefully save civilization. Along the way, he picks up an android who wants to be human and a well-intentioned former convict who has had a lobotomy. As this strange foursome encounters an environmentally depleted and lawless continent, the parallels to our own times become devastatingly—and hilariously—clear.

Filled with footnotes that could be an incredible novel in their own right, FKA USA is insanely smart and brimming with social satire. A futuristic novel that is a mirror to our contemporary world, FKA USA deserves to be shelved alongside such classics as The Hitchhiker's Guide to the Galaxy.

Reed King is the pseudonym of a New York Times bestselling author and TV writer.