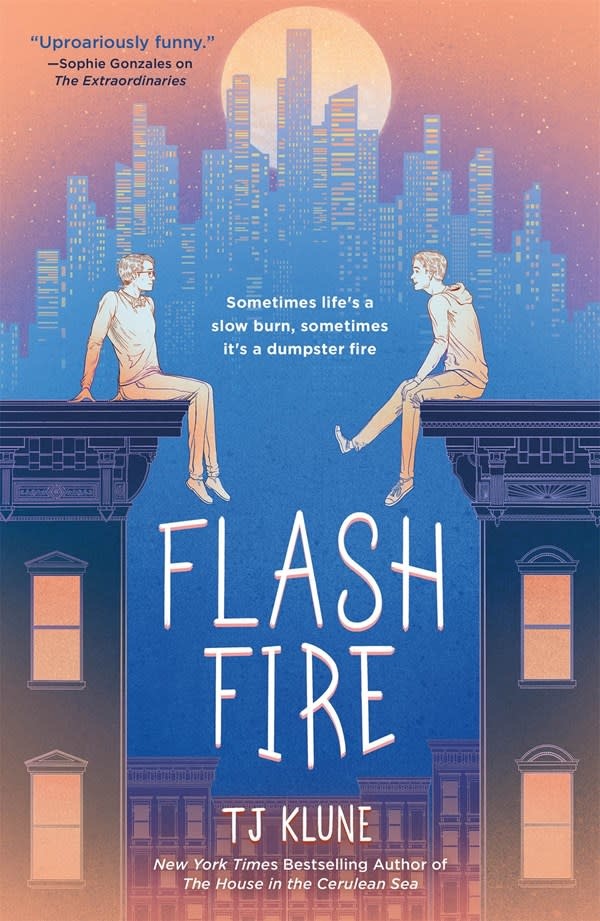 Flash Fire is the explosive sequel to The Extraordinaries by New York Times and USA Today bestselling author TJ Klune!

Through bravery, charm, and an alarming amount of enthusiasm, Nick landed himself the superhero boyfriend of his dreams. Now instead of just writing stories about him, Nick actually gets to kiss him. On the mouth. A lot. But having a superhero boyfriend isn’t everything Nick thought it would be—he’s still struggling to make peace with his own lack of extraordinary powers.

When new Extraordinaries begin arriving in Nova City—siblings who can manipulate smoke and ice, a mysterious hero who can move objects with their mind, and a drag queen superhero with the best name and the most-sequined costume anyone has ever had—it’s up to Nick and his friends Seth, Gibby, and Jazz, to determine who is virtuous and who is villainous.

New Extraordinaries aren’t the only things coming to light. Long-held secrets and neglected truths are surfacing that challenge everything Nick knows about justice, family, and being extraordinary. Which is a lot to handle when Nick really just wants to finish his self-insert bakery AU fanfic.

Will it all come together in the end or will it all go down in flames?

TJ Klune is the New York Times and USA Today bestselling, Lambda Literary Award-winning author of The Extraordinaries, The House in the Cerulean Sea, and more. Being queer himself, TJ believes it’s important—now more than ever—to have accurate, positive, queer representation in stories. Visit him online at TJKluneBooks.com, on Twitter at @tjklune, and Instagram as @tjklunebooks. The Extraordinaries was TJ Klune's YA debut.