Home » Flowers in the Gutter: ...Edelweiss Pirates, Teenagers Who Resisted the Nazis 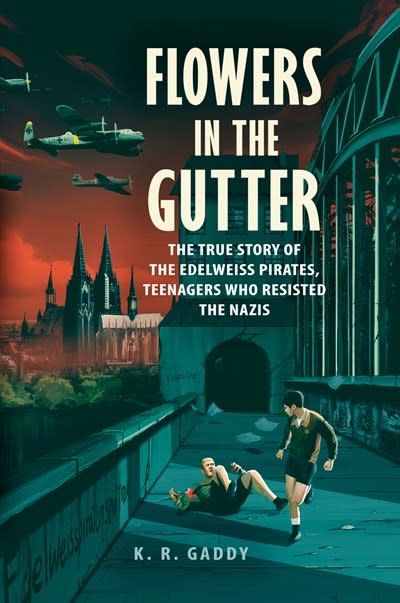 Flowers in the Gutter: ...Edelweiss Pirates, Teenagers Who Resisted the Nazis

Photo-illustrated nonfiction, the story of the Edelweiss Pirates, a group of working-class teens who not only survived but resisted the Nazis by whatever means they could, even when they knew it could cost them their lives.

Flowers in the Gutter is told from the points of view Gertrude, Fritz, and Jean, three young people from working-class neighborhoods in Cologne, beginning with their pre-school years at the dawn of the Third Reich in the 1930s. Gaddy shows how political activism was always a part of their lives and how they witnessed firsthand the toll it took on their parents—and how they still carried the torch for justice when it was their turn.

Once the war began, Gertrude, Fritz, and Jean and their friends survived and even resisted in one of the most heavily bombed cities in Germany. Gaddy includes tense accounts of fights with Hitler Youth and the Gestapo, of disseminating anti-Nazi pamphlets, of helping POWs and forced laborers, and even of sabotaging Nazi factories.

Ultimately, the war ended tragically for several young Pirates, and Gaddy shows how postwar politics and prejudices led to these young men and women being branded criminals for decades after the war.