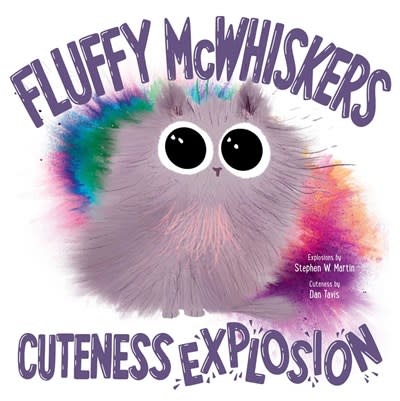 Friendship is hard for Fluffy, a kitten so precious that anyone who looks at her explodes!

Meet Fluffy—an adorable kitten. So adorable, in fact, that anyone who sees her will spontaneously explode into balls of sparkles and fireworks. KABOOM! Poof.

Poor Fluffy doesn’t want anyone to get hurt, but everything she tries, even a bad haircut, just makes her cuter! So Fluffy runs away someplace no one can find her. Find out if there’s any hope for Fluffy in this funny and subversive story about self-acceptance and finding friendship in unlikely places.

Stephen W. Martin is a writer on Frederator’s Bravest Warriors and the writer and director of many acclaimed short films. Stephen is also the author of several picture books, including Charlotte and the Rock and Fluffy McWhiskers Cuteness Explosion. He currently works as a story editor in film and comic books and lives with his wife in Los Angeles. Visit him at Stephen-W-Martin.com.

Dan Tavis is illustrator living in New Hampshire. He has been doodling ever since his first math class in elementary school! He is the illustrator of Common Critters and Fluffy McWhiskers Cuteness Explosion, among other projects. Learn more at DanTavis.com.