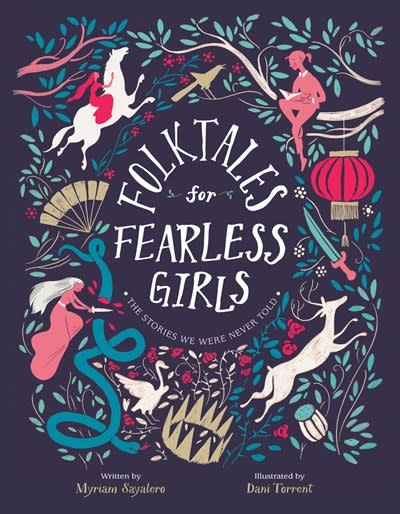 Heroines save the day in this empowering collection of folktales from around the world, perfect for fans of Good Night Stories for Rebel Girls.

Curses to be broken. Riddles to be solved. Kings’ favor to be won. These are the standard stories we’ve heard in folktales and fables for as long as we can remember—challenges faced and overcome by princes and knights in shining armor. In Folktales for Fearless Girls, though, we see a different set of heroes charge across the page. In fact, we see heroines.

Wily women and clever girls, valiant queens and brave villagers—these are the people to save the day in this collection of folktales from around the world and across the ages. Long before J.K. Rowling brought us Hermione Granger, well before Katniss Everdeen entered the arena, these fierce protagonists were the role models for strong girls through the ages. Here we read the story of Jimena, who dresses like a man to go fight in a war; of Min, whose cleverness leads her family to riches; and of Nabiha, who outsmarts thieves and wins the respect of the king. With stories from China, Russia, Persia, India, Armenia, the UK, Spain, France, Southern Africa, Egypt, and Germany, this is a collection of tales that showcases the original literary feminists.

With beautiful full-color art throughout to accompany these empowering tales, this an essential book for all girls!

Myriam Sayalero (myriamsayalero.com) is a journalist and the director of the multiplatform content site Adosaguas. She has had several books published in Spain and Mexico. The most recent are Los regalos de la vida (Aguilar, 2016), Diario irreverente del desamor (Planeta México, 2017), and Poderosas (Larousse México, 2017). Her latest children’s publications are ¡Vaya con el día especial! (Alfaguara, 2017) and Diario de emociones (Larousse, 2017). Follow her on Twitter @myriam_sayalero.

Dani Torrent (danitorrent.com) has a degree in art history from the University of Barcelona and studied fine arts and illustration at the Llotja Advanced School of Art and Design. He has exhibited his award-winning artwork around the world, and has been published in many countries. In addition to his work as an illustrator, he has also written several of his own books in Spanish. He has won the Young Creators prize of the Fita Foundation of Girona (Spain), the second-place prize of the intentional drawing festival of Zabrze (Poland) and the second-place prize of the BIISA Festival of Amarante (Portugal). Dani lives in Barcelona. Follow him on Twitter @danitorrent1.