Home » Follow Me to Hell: McNelly's Texas Rangers & the Rise of Frontier Justice 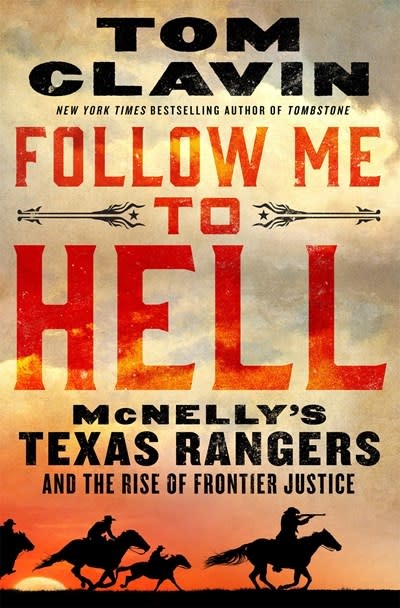 Follow Me to Hell: McNelly's Texas Rangers & the Rise of Frontier Justice

Set against the backdrop of 200 years of thrilling Texas Rangers history, this is the explosive true story of how legendary Ranger Leander McNelly and his men brought justice to a lawless frontier.

In the turbulent 1870s in Texas, this revered and fearless Ranger captain led his men in one dramatic campaign after another, throwing cattle thieves, desperadoes, border ruffians, and other dangerous criminals into jail or, if that's how they wanted it, six feet under. One of the highlights of "McNelly's Rangers," as the nation came to call them, was the retrieval of stolen cattle that required the 26 Rangers to invade Mexico and successfully take on hundreds of enemy troops with their Sharps rifles and six-guns. This page-turner takes readers into the tough life along the Texas border that was tamed by a courageous, yet doomed, captain and his team of fearless Texas Rangers.

TOM CLAVIN is a #1 New York Times bestselling author and has worked as a newspaper editor, magazine writer, TV and radio commentator, and a reporter for The New York Times. He has received awards from the Society of Professional Journalists, Marine Corps Heritage Foundation, and National Newspaper Association. His books include the bestselling Frontier Lawmen trilogy—Wild Bill, Dodge City, and Tombstone—and Blood and Treasure with Bob Drury. He lives in Sag Harbor, NY.