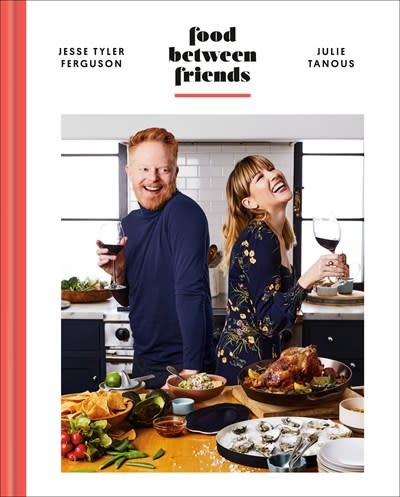 In best-friend duo Jesse and Julie’s debut cookbook, they pay homage to their hometowns as they whip up wholesome California food with rich Southern and Southwestern twists.

If you follow Jesse Tyler Ferguson, star of Modern Family, on Instagram, you know that he loves to cook. He loves it so much that he co-founded a food blog, Julie & Jesse, with friend and culinary school-trained recipe developer Julie Tanous where they share their favorite recipes.

In Food Between Friends, they bring the blog to life, cooking up all the delightful dishes they want to eat, focusing on the joys of food and friendship. Drawing inspiration from the regional foods of the Southwest and South that Jesse and Julie grew up with (respectively), they seamlessly merge west coast style with fun and funky recipes, such as Hatch Green Chile Mac and Cheese, Baked Eggs in Tomatoes and Grits, and Carne Asada & Shishito Skewers. This book feels just like cooking with a friend, because that’s exactly what it is.

Jesse Tyler Ferguson is a celebrated actor with a passion for cooking and entertaining, best known for his lead role in the TV series Modern Family. Now a proud father, Jesse lives in Los Angeles with his husband, Justin Mikita, and their baby, Beckett.

Julie Tanous is a sought-after recipe developer, food writer and, with Jesse Tyler Ferguson, is the co-creator of the blog Julie & Jesse. Her recipes have been featured in Food & Wine magazine, Food & Wine’s annual cookbook, Bake from Scratch, Taste of the South, People magazine, LA Weekly and InStyle online. She was born and raised in Alabama, but now lives in Los Angeles with her husband, their two children, and their French bulldog.