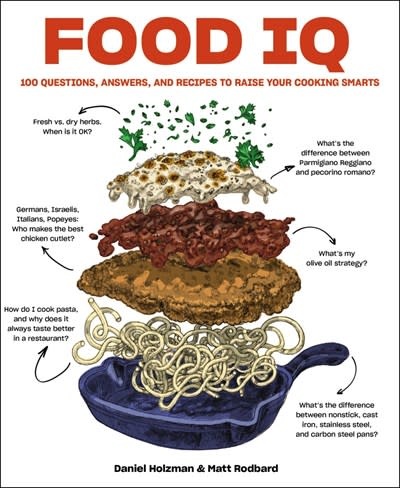 In the spirit of books like Salt, Fat, Acid, Heat and Food Lab, an informative, entertaining, and essential guide to talking your kitchen smarts to a higher level—from two food world professionals (a chef and a writer).

When food writer Matt Rodbard met chef Daniel Holzman while covering the opening of his restaurant, the Meatball Shop, on New York’s Lower East Side, it was a match made in questions. More than a decade later, the pair have remained steadfast friends—they write a popular column together, and talk, text, and DM about food constantly. Now, in Food IQ, they’re sharing their passion and deep curiosity for home cooking, and the food world zeitgeist, with the world.Featuring 100 essential cooking questions and answers, Food IQ includes recipes and instructions for a variety of dishes that utilize a wide range of ingredients and methods. Holzman and Rodbard provide essential information every home cook needs on a variety of cooking fundamentals, including:Why does pasta always taste better in a restaurant? (The key to a perfect sauce is not pasta water, but a critical step involving . . . emulsification.)When is it okay to cook with frozen vegetables? (Deep breath. It's very much OK, but only with certain types.)What is baker’s math, and why is it the secret to perfect pastry every time? (It uses the weight of flour as the constant and . . . we have a handy chart for you.) Rodbard and Holzman also offer dozens of delicious recipes, such as Oyakodon—Chicken and Eggs Poached in Sweet Soy Sauce Dashi, The Cast Iron Quesadilla That Will Change the Way You Quesadilla, and 40 Minute Red Sauce. Throughout this culinary reference guide and cookbook readers can expect to find both wisdom and wit, as well as stunning photos and illustrations, and illuminating conversations with notable chefs, writers, and food professionals such as Ina Garten, Roy Choi, Eric Ripert, Helen Rosner, Thérèse Nelson, Priya Krishna, and Claire Saffitz. From grilling to sous vide, handmade pasta to canned fish, and deconstructing everything from salt and olive oil to organic produce and natural wine, Food IQ is a one-stop shop for foodies and home cooks, from novices to the most-adventurous culinarians. You don’t know what you don’t know.

Matt Rodbard is a writer, editor, and author of food and culture books with more than two decades of experience working in television, magazines, book publishing, and online media. He’s the author of the New York Times bestseller Koreatown: A Cookbook, and the Founding Editor of the two-time James Beard Foundation Award–winning online food and culture magazine TASTE. He has written for the New York Times, the Wall Street Journal, Travel + Leisure, Bon Appétit, Saveur, GQ, and Fodor’s. He lives in New York. Daniel Holzman started his cooking career at the age of 15 at Le Bernardin in New York City before attending the Culinary Institute of America with a full scholarship from the James Beard Foundation. In 2010, he opened The Meatball Shop on New York City’s Lower East Side, which now boasts locations in Williamsburg, the West Village, Chelsea, the Upper East Side, and Hell’s Kitchen, and is the co-author of The Meatball Shop Cookbook. Daniel has appeared frequently in the media, including Good Morning America, the Today show, and The Tonight Show with Jay Leno, and has been featured in an array of publications such as the New York Times, Food & Wine, Saveur, People, Food Network Magazine, and GQ. He lives in Los Angeles.