Home » Foreshadow: ...the Magic of Reading and Writing YA 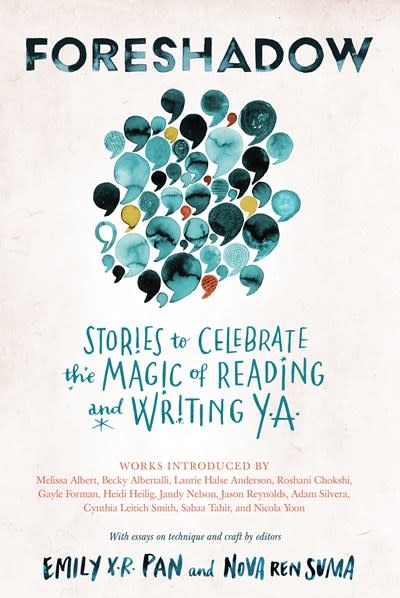 Foreshadow: ...the Magic of Reading and Writing YA

An anthology of short stories by new and up-and-coming YA authors featured in the online magazine Foreshadow, along with craft advice for writing YA from New York Times bestselling authors Nova Ren Suma and Emily X. R. Pan.

Created by New York Times bestselling authors Emily X. R. Pan and Nova Ren Suma, Foreshadow is so much more than a short story collection. A trove of unforgettable fiction makes up the beating heart of this book, and the accompanying essays offer an ode to young adult literature, as well as practical advice to writers.

Featured in print for the first time, the thirteen stories anthologized here were originally released via the buzzed-about online platform Foreshadow. Ranging from contemporary romance to mind-bending fantasy, the Foreshadow stories showcase underrepresented voices and highlight the beauty and power of YA fiction. Each piece is selected and introduced by a YA luminary, among them Gayle Forman, Laurie Halse Anderson, Jason Reynolds, and Sabaa Tahir.

What makes these memorable stories tick? What sparked them? How do authors build a world or refine a voice or weave in that deliciously creepy atmosphere to bring their writing to the next level? Addressing these questions and many more are essays and discussions on craft and process by Nova Ren Suma and Emily X. R. Pan.

This unique compilation reveals and celebrates the magic of reading and writing for young adults.

Nova Ren Suma is the author of the #1 New York Times bestselling The Walls Around Us, which was an Edgar Award finalist. She also wrote Imaginary Girls and 17 & Gone and is co-creator of FORESHADOW: A Serial YA Anthology. She has an MFA in fiction from Columbia University and teaches writing at Vermont College of Fine Arts and the University of Pennsylvania. Originally from the Hudson Valley, she spent most of her adult life in New York City and now lives in Philadelphia.Emily X.R. Pan is the New York Times bestselling author of The Astonishing Color of After, which won the APALA Honor Award and the Walter Honor Award, received six starred reviews, was an LA Times Book Prize finalist, and was longlisted for the Carnegie Medal. She lives in Brooklyn, New York. Visit Emily online at exrpan.com, and find her on Twitter and Instagram: @exrpan.