Home » Forget This Ever Happened 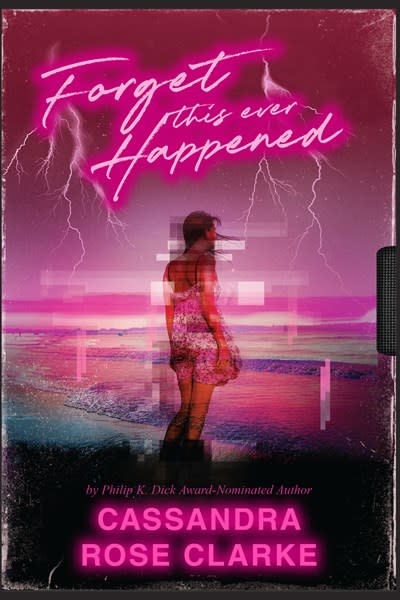 Forget This Ever Happened

And sometimes there isn’t.

June, 1993. Claire has been dumped in rural Indianola, Texas, to spend her whole vacation taking care of mean, sickly Grammy. There’s nothing too remarkable about Indianola: it’s run-down, shabby, and sweltering, a pin-dot on the Gulf Coast.

Except there is something remarkable. Memories shimmer and change. Lizards whisper riddles under the pecan trees. People disappear as if they never existed. Yesterday keeps coming unspooled, like a video tape. And worst of all, a red-lightning storm from beyond our world may just wipe the whole town off the map, if Claire and her maybe-girlfriend Julie can’t stop it.

Because reality doesn’t apply in Indianola. Indianola is not supposed to exist.

Surprising, brilliant, and, like, totally tight, Forget This Ever Happened is speculative horror at its finest, featuring a queer romance from a queer author and dark, dazzling world-building.

A New York Public Library Best Book of the Year

Cassandra Rose Clarke has been nominated for both the Pushcart Prize and the Phillip K. Dick Award, and is frequently published in magazines like Fantasy & Science Fiction and Strange Horizons. Her 2012 novel THE ASSASSIN’S CURSE was a YALSA Best Book for Young Adults and a Kirkus Reviews Best Teen Book of the Year. She is a graduate of Clarion West, the country’s premier writing program for speculative fiction.