Home » Forward: Notes on the Future of Our Democracy [Memoir] 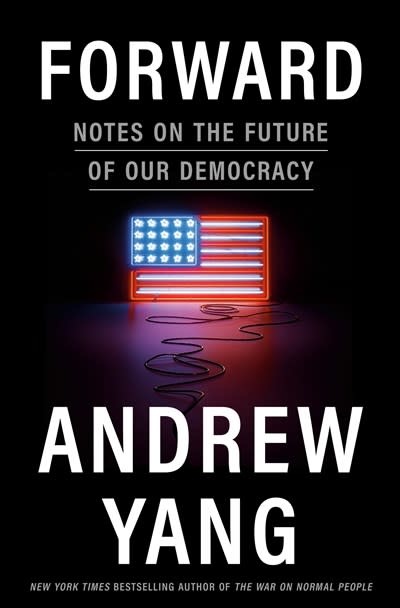 Forward: Notes on the Future of Our Democracy [Memoir]

A lively and bold blueprint for moving beyond the “era of institutional failure" by transforming our outmoded political and economic systems to be resilient to twenty-first-century problems, from the popular entrepreneur, bestselling author, and political truth-teller

Despite being written off by the media, Andrew Yang’s shoestring 2020 presidential campaign—powered by his proposal for a universal basic income of $1,000 a month for all Americans—jolted the political establishment, growing into a massive, diverse movement.

Now, in Forward, Yang reveals that UBI and the threat of job automation are only the beginning, diagnosing how a series of cascading problems within our antiquated systems keeps us stuck in the past—imperiling our democracy at every level. With America’s stagnant institutions failing to keep pace with technological change, we grow more polarized as tech platforms supplant our will while feasting on our data. Yang introduces us to the various “priests of the decline” of America, including politicians whose incentives have become divorced from the people they supposedly serve.

The machinery of American democracy is failing, Yang argues, and we need bold new ideas to rewire it for twenty-first-century problems. Inspired by his experience running for office and as an entrepreneur, and by ideas drawn from leading thinkers, Yang offers a series of solutions, including data rights, ranked-choice voting, and fact-based governance empowered by modern technology, writing that “there is no cavalry”—it’s up to us. This is a powerful and urgent warning that we must step back from the brink and plot a new way forward for our democracy.

Andrew Yang was a 2020 Democratic presidential candidate and a 2021 candidate for mayor of New York City. Named by President Obama as a Presidential Ambassador of Global Entrepreneurship, he is the founder of Humanity Forward and Venture for America. Yang’s New York Times bestselling book The War on Normal People helped introduce the idea of universal basic income into the political mainstream. Yang is a graduate of Brown University, where he graduated with degrees in economics and political science, and Columbia Law School, where he was an editor of the Law Review. He lives with his family in New York.