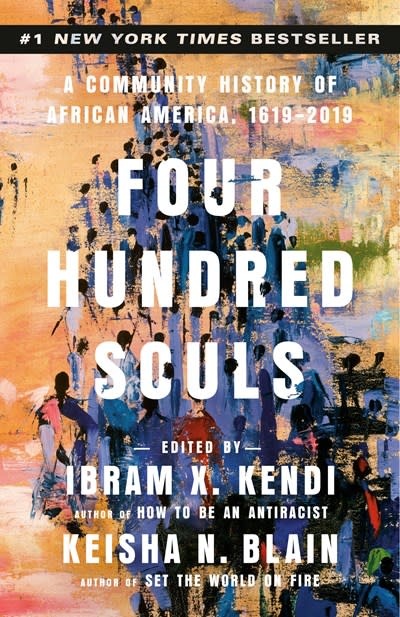 2019 marked the four hundredth anniversary of the first captive Africans in Virginia—and also launched the Four Hundred Souls project, spearheaded by Ibram X. Kendi, founding director of the Boston University Center for Antiracist Research, and Keisha N. Blain, associate professor of history at the University of Pittsburgh and the president of the African American Intellectual History Society. They’ve gathered together ninety Black writers from all disciplines to tell one of history’s great epics: the journey of African Americans from 1619 to the present. With lyrical interludes from ten poets, eighty writers take on a five-year period of that four-hundred-year span, exploring their periods through a variety of techniques: historical essays, short stories, personal vignettes, and fiery polemic. This comprehensive, dynamic, single-volume work is an essential historical keepsake.

Ibram X. Kendi is the Andrew W. Mellon Professor in the Humanities at Boston University and the founding director of the BU Center for Antiracist Research. He is a contributing writer at The Atlantic and a CBS News correspondent. He is the author of many books including Stamped from the Beginning: The Definitive History of Racist Ideas in America, which won the National Book Award for Nonfiction, and four #1 New York Times bestsellers, How to Be an Antiracist; Stamped: Racism, Antiracism, and You, co-authored with Jason Reynolds; Antiracist Baby, illustrated by Ashley Lukashevsky; and Four Hundred Souls: A Community History of African America, 1619-2019, co-edited with Keisha N. Blain. In 2020, Time magazine named him one of the 100 most influential people in the world.Keisha N. Blain is an award-winning historian, professor, and writer. She is currently an associate professor of history at the University of Pittsburgh, the president of the African American Intellectual History Society, and an editor for The Washington Post’s “Made by History” section. Her writing has appeared in popular outlets such as The Atlantic, The Guardian, Politico, and Time. She is the author of Set the World on Fire: Black Nationalist Women and the Global Struggle of Freedom and Until I Am Free: Fannie Lou Hamer’s Vision of America.