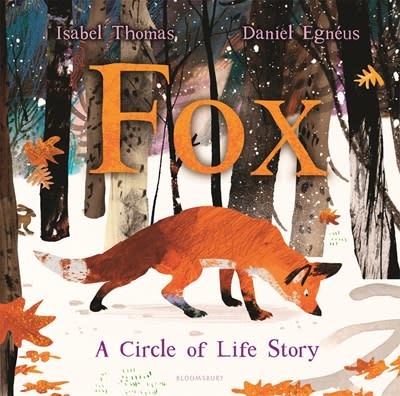 From the author-illustrator pairing behind the acclaimed Moth, a scientific look at the circle of life.

In the frost-covered forest of early spring, fox is on a mission to find food for her three cubs. As they grow, she teaches them how to survive in the wild. Until one day, fox dies. Her body goes back to earth and grass and air, nourishing the world around her and bringing the forest to life. Death is not just an end, it’s also a beginning.

Fox: A Circle of Life Story answers the big scientific question: What happens when we die?

Isabel Thomas studied Human Sciences at the University of Oxford. She is a science writer and children’s author who has been shortlisted for the Royal Society Young People’s Book Prize, the ASE Science Book of the Year and the Blue Peter Book Awards. She is a primary school governor and STEM Ambassador. Her previous books for Bloomsbury include Moth: An Evolution Story, which was also illustrated by Daniel Egnéus.

Daniel Egnéus collaborated with Neil Gaiman on an illustrated edition of American Gods (Headline). He has also illustrated The Raven Child and the Snow Witch (Templar) and The Thing (Egmont). He is a well-regarded fashion artist too, regularly illustrating for the likes of Chanel, H&M, Nike and many more. Daniel's first book for Bloomsbury was Moth: An Evolution Story.