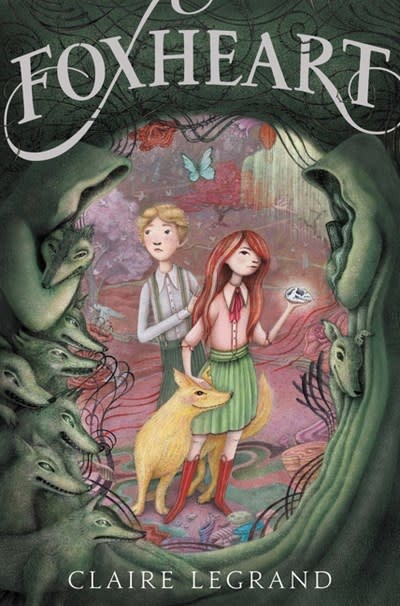 For fans of Kelly Barnhill and Diana Wynne Jones. Foxheart is a classic fantasy-adventure about the danger of lies and the power of truth, the strength found in friendship, and the value of loving and being loved . . . even if it means risking your heart. In a starred review, Publishers Weekly says that Foxheart is a “heart-pounding adventure.”

Orphan. Thief. Witch. Twelve-year-old Quicksilver lives as a thief in the sleepy town of Willow-on-the-River. Her only companions are her faithful dog and partner in crime, Fox—and Sly Boots, the shy boy who lets her live in his attic when it's too cold to sleep on the rooftops. It's a lonesome life, but Quicksilver is used to being alone. When you are alone, no one can hurt you. No one can abandon you. Then, one day, Quicksilver discovers that she can perform magic. Real magic. The kind that isn't supposed to exist anymore. Magic is forbidden, but Quicksilver nevertheless wants to learn. With real magic, she could become the greatest thief who ever lived. She could maybe even find her parents. What she does find, however, is much more complicated and surprising. . . . Full of magic, adventure, and an original and compelling cast of characters, Foxheart is a fast-paced fantasy reminiscent of Howl's Moving Castle.

Claire Legrand is the bestselling author of books for children and teens, including Thornlight, Furyborn, Sawkill Girls, The Cavendish Home for Boys and Girls, The Year of Shadows, Winterspell—and its prequel, Summerfall—and Some Kind of Happiness. She is also one of the four authors of The Cabinet of Curiosities.She thinks musicians and librarians are the loveliest of folks (having been each of those herself) and, while she loves living in central New Jersey, she dearly misses her big, brash, beautiful home state of Texas. You can visit her online at www.claire-legrand.com, on Twitter @clairelegrand, on Tumblr at clairelegrand.tumblr.com, and on Facebook at clairelegrandwriter.