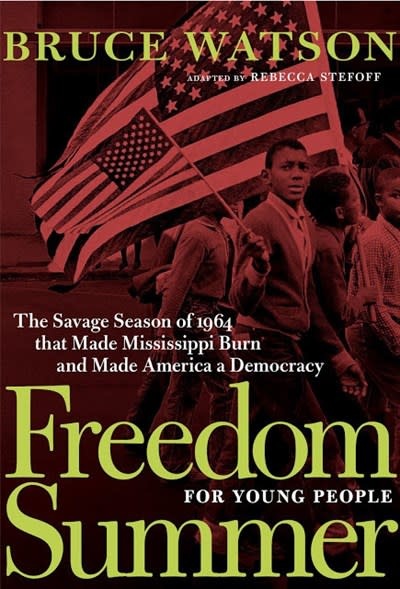 This latest edition in Triangle Square’s For Young People series is a gripping account of the summer that changed America.

In the summer of 1964, as the Civil Rights movement boiled over, the Student Nonviolent Coordinating Committee (SNCC) sent more than seven hundred college students to Mississippi to help black Americans already battling for democracy, their dignity and the right to vote. The campaign was called “Freedom Summer.” But on the evening after volunteers arrived, three young civil rights workers went missing, presumed victims of the Ku Klux Klan. The disappearance focused America’s attention on Mississippi. In the days and weeks that followed, volunteers and local black activists faced intimidation, threats, and violence from white people who didn’t believe African Americans should have the right to vote. As the summer unfolded, volunteers were arrested or beaten. Black churches were burned. More Americans came to Mississippi, including doctors, clergymen, and Martin Luther King. A few frightened volunteers went home, but the rest stayed on in Mississippi, teaching in Freedom Schools, registering voters, and living with black people as equals. Freedom Summer brought out the best and the worst in America. The story told within these pages is of everyday people fighting for freedom, a fight that continues today. Freedom Summer for Young People is a riveting account of a decisive moment in American history, sure to move and inspire readers.

Bruce Watson’s previous books include Sacco and Vanzetti, a finalist for the Edgar Award, and Bread and Roses, a New York Public Library Book to Remember. His journalism has appeared in the Los Angeles Times, the Boston Globe, Smithsonian, and Reader’s Digest. He lives in Massachusetts.

Rebecca Stefoff has devoted her career to writing nonfiction books for young readers. Her publications include histories, literary biographies, an encyclopedia of maps, and numerous books on science and environmental issues. She has also adapted a number of landmark works in history and science, include Howard Zinn’s A People’s History of the United States, Jared Diamond’s The Third Chimpanzee, Charles C. Mann’s bestselling 1493, Jill Jonnes’s Eiffel’s Tower, and Ronald Takaki’s A Different Mirror for Young People: A History of Multicultural America.