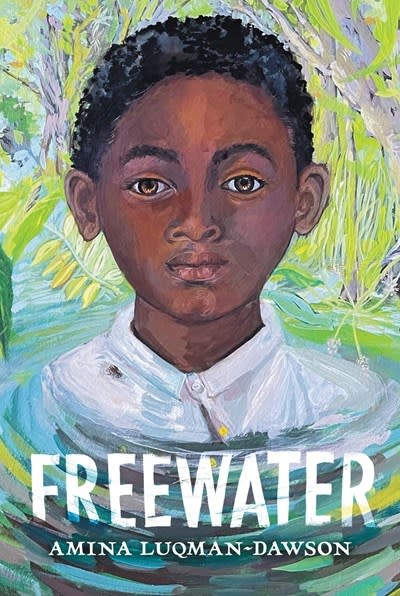 After an entire young life of enslavement, twelve-year-old Homer escapes Southerland Plantation with his little sister Ada, leaving his beloved mother behind. Much as he adores her and fears for her life, Homer knows there’s no turning back, not with the overseer on their trail. Through tangled vines, secret doorways, and over a sky bridge, the two find a secret community called Freewater, deep in the recesses of the swamp.

In this new, free society made up of escaped slaves and some born-free children, Homer cautiously embraces a set of spirited friends, almost forgetting where he came from. But when he learns of a threat that could destroy Freewater, he hatches a plan to return to Southerland plantation, overcome his own cautious nature, and free his mother from enslavement. Loosely based on a little-mined but important piece of history, this is an inspiring and deeply empowering story of survival, love, and courage.

Amina Luqman Dawson is the author of the pictorial history book Images of America: African Americans of Petersburg (Arcadia Publishing). Her op-eds on race and popular culture have appeared in The Washington Post, The San Francisco Chronicle, and more. She's a proud mother of a 12-year-old son. Amina, her husband, and her son reside in Arlington, VA.