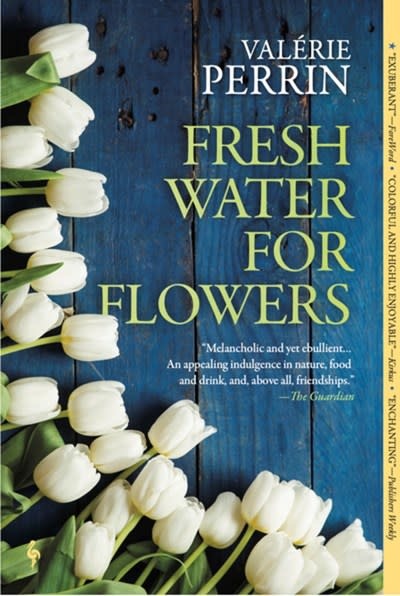 Fresh Water for Flowers: A novel

A 2020 INDIES INTRODUCE AND INDIE NEXT LIST PICKA number 1 best-seller in France and in Italy, where it was dubbed Italy’s favorite “lockdown novel,” Fresh Water for Flowers is an intimately told story about a woman who definitely believes in happiness, despite it all.Violette Toussaint is the caretaker at a cemetery in a small town in Bourgogne. Her life is lived to the predictable rhythms of the often funny, always moving confidences that casual mourners, regular visitors, and sundry colleagues share with her.Violette’s routine is disrupted one day by the arrival of Julien Sole—local police chief—who has come to scatter the ashes of his recently deceased mother on the gravesite of a complete stranger. It soon becomes clear that Julien’s inexplicable gesture is intertwined with Violette’s own complicated past.“Melancholic and yet ebullient…An appealing indulgence in nature, food and drink, and, above all, friendships.”—The Guardian

Valérie Perrin was born in 1967 in Remiremont, in the Vosges Mountains, France. She grew up in Burgundy and settled in Paris in 1986. Her novel The Forgotten Sunday (2015) won the Booksellers Choice Award and the paperback edition has been long-selling best-seller since publication. Her English-language debut, Fresh Water for Flowers (Europa, 2020) won the Maison de la Presse Prize, the Paperback Readers Prize, and was named a 2020 ABA Indies Introduce and Indie Next List title. It has been translated into over thirty languages. Figaro Littéraire named Perrin one of the ten best-selling authors in France in 2019, and in Italy, Fresh Water for Flowers was the best selling book of 2020. Perrin now lives in NormandyFor Europa Editions, Hildegarde Serle has three novels by Christelle Dabos, including the best-selling A Winter's Promise. She lives in London, but her heart lives on the Quai aux Fleurs in Paris.