Home » From the River to the Sea: The Untold Story of the Railroad War That Made the West 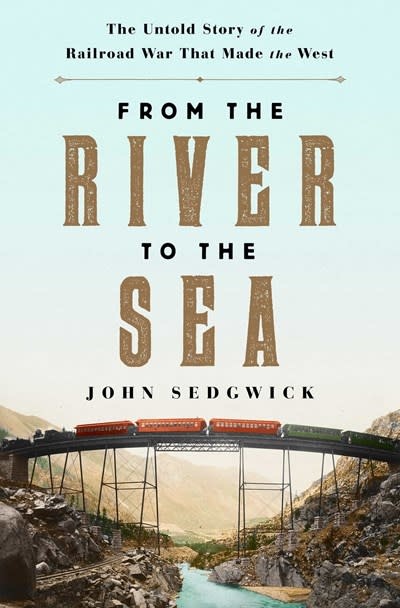 From the River to the Sea: The Untold Story of the Railroad War That Made the West

A sweeping and lively history of one of the most dramatic stories never told—of the greatest railroad war of all time, fought by the daring leaders of the Santa Fe and the Rio Grande to seize, control, and create the American West.

It is remarkable now to imagine, but during the 1870s, the American West, for all its cloud-topped peaks and endless coastline, might have been barren tundra as far as most Americans knew. In 1869, the first transcontinental railroad had made history by linking East and West, but, relying heavily on federal grants, it left an opening for two brash new railroad men, the Civil War hero behind the Rio Grande and the corporate chieftain of the Santa Fe, to build the first transcontinental to make money by creating a railroad empire across the Southwest to the sea.

The railroad companies were governments on wheels: they set the course, chose the route, and built up cities and towns along their tracks. Their choices brought life to such out-of-the-way places as San Diego, Santa Fe, Albuquerque, Denver, and to Los Angeles most of all: The Santa Fe turned a sleepy backwater of 30,000 into a booming metropolis of 150,000 in three years—the most explosive growth of any city in the history of the United States.

By then, the two men behind the Rio Grande and the Santa Fe had fought all across the west to lay claim to the routes that would secure the most profitable territory and the richest silver mines. But they often led through narrow mountain passes or up treacherous canyons with room for only a single set of tracks. To win them, each side turned hundreds of their train workers into private armies backed by local militia and paid mercenaries like Dodge City’s Bat Masterson. The war left one of the two lines reeling in a death spiral and sent the other on to a greatness unequaled by any other railroad in the world.

From the River to the Sea is the epic story of the greatest railroad war of all time, fought by two railroad men for glory and fortune—and the right to shape the future of the West.

John Sedgwick is the bestselling author of Blood Moon: An American Epic of War and Splendor in the Cherokee Nation, and twelve other books: four works of literary nonfiction, two novels, a family memoir, and five collaborations. He has also written extensively for The Atlantic, GQ, Newsweek, Esquire, and Vanity Fair. He is married to the CNN analyst and Financial Times columnist Rana Foroohar, and lives in Brooklyn, New York.