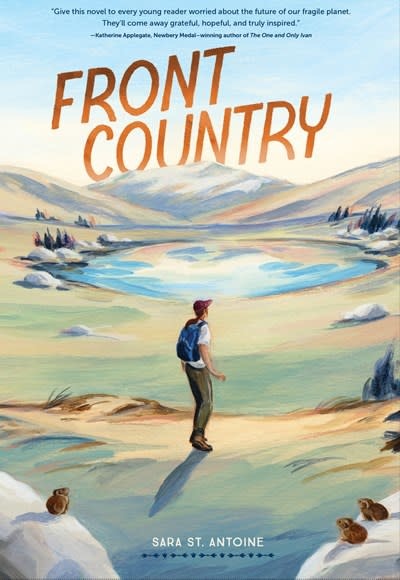 My Side of the Mountain meets Greta Thunberg in this heartfelt, exciting novel about one girl’s growing awareness of herself, the world, and the relationship between the two.

The world is not okay. Now what?

Ginny Shepard is glad to be in Montana for a month of backcountry camping before she starts high school. The world is on fire. That's the awful truth. And Ginny would much rather be hiking in the mountains than doing the summer college prep classes her parents think will help her future. Because, the future? Who even knows what that is anymore.

But once Ginny gets to camp, things get complicated fast. She meets her tripmates: five challenging, rebellious, tech-addicted boys. And she finds out TrackFinders is designed for kids who need extra "support." Instead of feeling free as a bird, Ginny feels trapped . . . and betrayed.

As her friendships with her fellow campers deepen on the trail, though, Ginny starts to see new sides of them—and of herself. Maybe out here in the backcountry she'll actually find what she needs to face the front country again.

Set in Montana's sweeping alpine wilderness, this epic adventure captures the tremendous heartbreak of realizing the world isn't okay at all and shows how that knowledge, and what we choose to do with it, shapes us into who we are.

AN EMPOWERING ADVENTURE STORY: Despite humans' ever-worsening impact on the environment, there are relatively few books about the topic—especially for young readers, and especially that don't feel preachy. This book is an empowering adventure story, and it's also positive, not depressing.

STRONG FEMALE PROTAGONIST: Ginny positively models dealing with strengths and weaknesses to readers, who are full of flaws but full of strengths, too. The way she struggles with both will speak to young readers. Even kids who are not interested in climate change will recognize her as a fellow young person and quickly become aware of the ways she's able to effect change—and the ways she still can't.

STEM TOPICS: Educators and librarians will love tying this fictional story to nonfiction curriculum, and there are several different access points for this book from a scientific perspective. Environmental science, earth science, climate change, differing regional biomes, geology, and biology are all explored in real-world, character-driven ways.

GIRLS IN SCIENCE: Ginny's passion for science shows readers that science-loving girls can be cool—and there are many different ways characters of all genders embrace science.

A THRILLING PAGE-TURNER: In the tradition of Hatchet and Wolf Hollow, this book is an excellent, fast-paced story that's impossible to put down. Kids will love every character—or love to hate them—and will finish the book feeling like they're leaving friends behind.

Kids who love adventure and nature

Sara St. Antoine is an award-winning author and freelance writer. A graduate of Williams College, Sara holds a master's degree from the Yale School of the Environment. Her debut novel, THREE BIRD SUMMER, was selected as a Boston Globe Best Book of the Year and an ALSC Notable Children's Book for middle grade readers. Sara also edits the Stories from Where We Live anthology series, which celebrates place-based literature from different regions of North America. She lives in Cambridge, Massachusetts, with her husband and two teenage daughters.