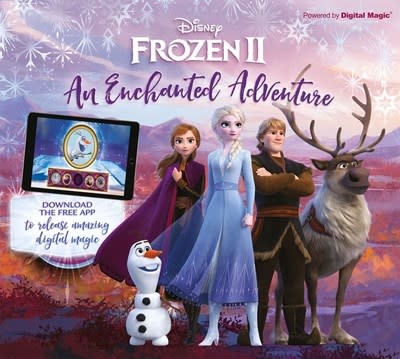 Both a character guide and an exploration of the story of Disney's Frozen 2 film.

Enter the world of Anna, Elsa, Olaf, Kristoff, and Sven as they spring to life on—and off—the page!

You’ll never want to let it go! Explore the characters and the story of Frozen 2, and download the free app to unlock unique experiences and create your very own digital magic. The first section of the book is a character guide with profiles of the main protagonists, and the second half tells the story of the film.

Portraits: Readers are able to trigger portraits of the main characters (Elsa, Anna, Kristoff, Sven, and Olaf), which will appear in 3D frames. They can collect the portraits within the app and display them on their wall. This adds a brand new level of interactivity by allowing the user to place all five portraits wherever they choose around their room.

Ice magic: Once readers have collected all four of the element crystals, they’ll unlock a magical power, creating frozen blasts of snowflakes with their fingers. This is similar to Elsa’s powers, which develop and grow in the new film.

Emily Stead is an accomplished author who has written hundreds of children’s titles, from bestselling character annuals to story and activity books.