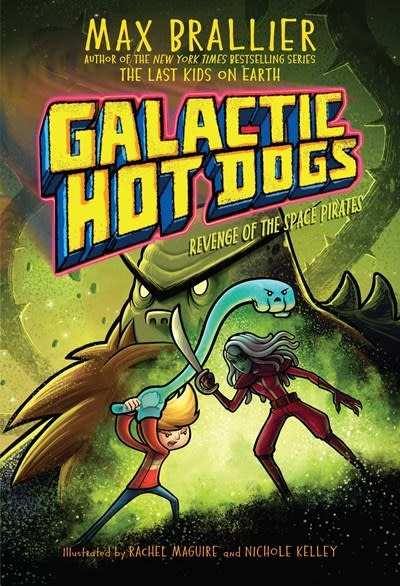 From the creator of the bestselling series The Last Kids on Earth! Cosmoe, Princess Dagger, Humphree, and the gang are back for another swashbuckling space adventure in this third book in the Galactic Hot Dog series.

It’s like deja vu all over again (and again and again) when Cosmoe is taken hostage by a space pirate with links to the hot dog seller’s early days in space. Humphree’s past also comes to light as the events of two friends’ first days on the Neon Wiener are revealed.

And the farther they go down memory lane, the more apparent it becomes that this pirate has landed them in a galaxy of danger.

Max Brallier is the New York Times, USA TODAY, and Wall Street Journal bestselling author of more than thirty books for children and adults. His books and series include The Last Kids on Earth, Eerie Elementary, Mister Shivers, Galactic Hot Dogs, and Can YOU Survive the Zombie Apocalypse? Max lives in New York City with his wife and daughter. Follow Max on Twitter @MaxBrallier or visit him at MaxBrallier.com.

Rachel Maguire is an award-winning illustrator and animator. She teaches comics to children and lives in Massachusetts with her husband, Jon, and her cat, Becky.

Nichole Kelley does not like to define herself as any specific kind of artist. In the past she has worked professionally as an animator, illustrator, and designer. This combination has allowed her to work on a variety of awesome projects, including web animation, casual games, console games, board games, and children’s illustration. In her free time, she enjoys video games, board games, toys, crafting of all sorts, and sleeping. Her latest venture is learning how to make glass beads and marbles.