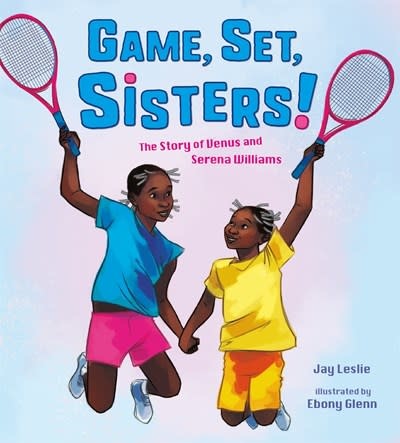 An uplifting picture book biography about the unwavering bond between sisters and tennis legends Venus and Serena Williams.

In 1989, two opponents faced off in their first tennis tournament. But they weren’t just rivals, they were also sisters. Sisters who would go on to become legends.

From their beginnings on a crumbling Compton tennis court to their shining achievements on the most prestigious stages, Game, Set, Sisters!: The Story of Venus and Serena Williams tells the inspirational story of two of the most beloved athletes in history and how despite being served the most challenging hardships in life—illness, family, loss, racism—they always continued to swing back stronger.

Jay Leslie graduated from Duke University with degrees in English, international comparative studies, and religion. She has written for Issa Rae Productions and was shortlisted for Chimamanda Adichie’s Farafina Trust. She is also the author of Who Did It First? 50 Politicians, Activists, and Entrepreneurs Who Revolutionized the World. She lives in Berlin, Germany.

Ebony Glenn is the illustrator of Brave Ballerina: The Story of Janet Collins and Flying High: The Story of Gymnastics Champion Simone Biles, among others. With a passion for great storytelling, she aspires to make art that will bring more beauty, wonder, and magic into people’s lives.