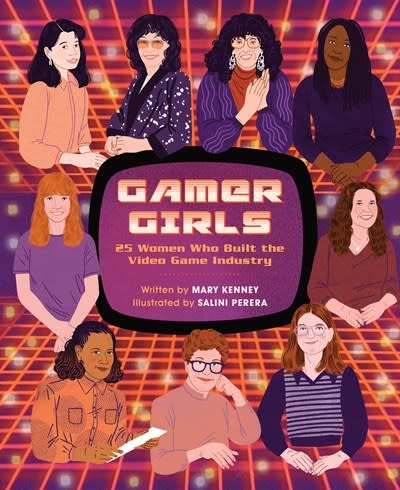 Discover the women behind the video games we love—the iconic games they created, the genres they invented, the studios and companies they built—and how they changed the industry forever.

Women have always made video games, from the 1960s and the first-of-its-kind, projector-based Sumerian Game to the blockbuster Uncharted games that defined the early 2000s. Women have been behind the writing, design, scores, and engines that power one of the most influential industries out there. In Gamer Girls, now you can explore the stories of 25 of those women. Bursting with bold artwork, easy-to-read profiles, and real-life stories of the women working on games like Centipede, Final Fantasy, Halo, and more, this dynamic illustrated book shows what a huge role women have played—and will continue to play—in the creation of video games.

With additional sidebars about other influential women in the industry, as well as a glossary and additional resources page, Gamer Girls offers a look into the work and lives of influential pixel queens such as: Roberta Williams (one of the creators of the adventure genre)Mabel Addis Mergardt (the first person to write a video game)Muriel Tramis (the French "knight" of video games)Keiko Erikawa (creator of the otome genre)Yoko Shimomura (composer for Street Fighter, Final Fantasy, and Kingdom Hearts)Rebecca Heineman (first national video game tournament champion)Danielle Bunten Berry (creator of M.U.L.E. and early advocate for multiplayer games)and more!Whether you’re a gamer girl who plays video games, a gamer girl who makes video games, or a parent raising a gamer girl, this entertaining, inspiring book will have you itching to pick up a controller or create your own video games!

Mary Kenney writes critically acclaimed video games, long-form non-fiction, essays, and short stories. She works at Insomniac Games, where she was on the writing team for Marvel's Spider-Man: Miles Morales and Ratchet & Clank: Rift Apart, and was a lead writer on Telltale's The Walking Dead series. Before making games, she studied in the game design master's program at New York University, and she teaches narrative design at Indiana University. She was an award-winning journalist with bylines in The New York Times, Salon, and Kotaku. When not writing or gaming, she can be found buried in a book, running a tabletop RPG, or trying to keep her forest of indoor plants alive.