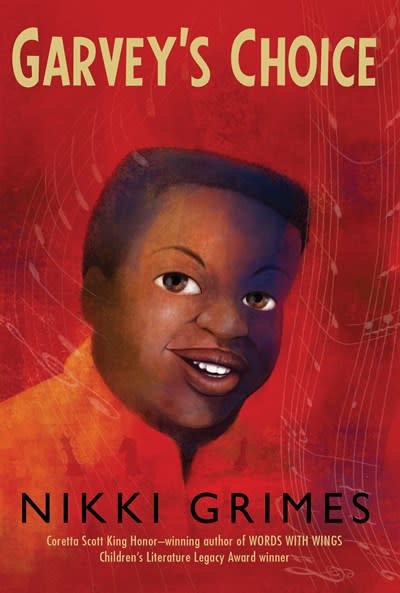 This emotionally resonant novel in verse by award-winning author Nikki Grimes celebrates choosing to be true to yourself.

Garvey’s father has always wanted Garvey to be athletic, but Garvey is interested in astronomy, science fiction, reading—anything but sports. Feeling like a failure, he comforts himself with food. Garvey is kind, funny, smart, a loyal friend, and he is also overweight, teased by bullies, and lonely. When his only friend encourages him to join the school chorus, Garvey’s life changes. The chorus finds a new soloist in Garvey, and through chorus, Garvey finds a way to accept himself, and a way to finally reach his distant father—by speaking the language of music instead of the language of sports.

Nikki Grimes is the recipient of the 2006 NCTE Award for Excellence in Poetry for Children. Her books include the New York Times best seller Barack Obama: Son of Promise, Child of Hope and the Dyamonde Daniel chapter-book series. She won the Coretta Scott King Award for Bronx Masquerade and earned a Coretta Scott King Author Honor five times—for Words with Wings, Jazmin’s Notebook, Dark Sons, Talkin’ about Bessie, and The Road to Paris. She is also the author of her critically acclaimed memoir in verse Ordinary Hazards. She lives in Corona, California. Visit nikkigrimes.com.