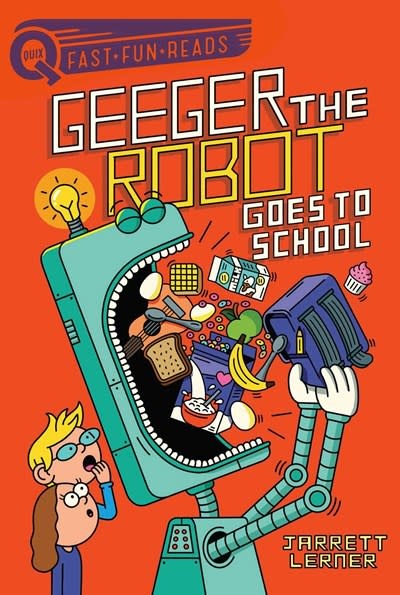 Geeger the Robot Goes to School

Amelia Bedelia meets James Patterson’s House of Robots series in the adventures of Geeger, a robot who goes to school for the very first time, in the first story in a new, fun-to-read Aladdin QUIX chapter book series that’s perfect for emerging readers!

Geeger the Robot is going to school. But not robot school…a school with kids, the human kind! Geeger isn’t used to human ways, and his zany misunderstandings and overly literal responses to instructions lead to quite a few mishaps. He’s starting to wonder if he can even make it until snack time! Will a bot made of wires, nuts, and bolts fit in with a classroom of kids?

Jarrett Lerner lives with his wife, a cat, and a dog who sometimes thinks he’s a cat in Medford, Massachusetts. You can visit him online at JarrettLerner.com.

Serge Seidlitz, an English/German hybrid born in Kenya, grew up traveling between the UK and Asia. A steady diet of MTV and Mad magazine fueled his desire to become an illustrator. He combines elements from popular culture with diverse influences to create work that forms an iconic and graphic language. Following his studies in graphic design at Camberwell College of Arts, Serge worked as an in-house designer at Cartoon Network before leaving to focus on illustration.