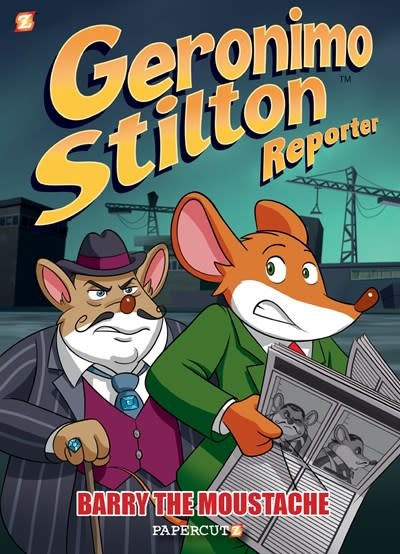 Can Geronimo take on the evil mobster Barry the Mouse-tache and get the scoop?

Sally Ratmousen, Editor-in-Chief of The Daily Rat and Geronimo Stilton’s biggest journalistic rival, mysteriously disappears one afternoon on the way to her car after work. Her ace reporter, Simon Squealer, shows up at Geronimo’s door with the troubling news… and reveals that notorious mobster Barry the Moustache is behind her disappearance. Is he telling Geronimo the truth or is this fake news? If it’s a hoax just to generate headlines, Geronimo and Sally might be in over their whiskers as they have upset the wrong mobster.

Based on the animated series now streaming on Netflix!

Born in New Mouse City, Mouse Island, GERONIMO STILTON is Rattus Emeritus of Mousomorphic Literature and of Neo-Ratonic Comparative Philosophy. He is the director of The Rodent's Gazette, New Mouse City's most widely read daily newspaper. Stilton was awarded the Ratitzer Prize for his scoops on The Curse of the Cheese Pyramidand The Search for Sunken Treasure. One of his bestsellers won the 2002 eBook Award for world's best-selling electronic book. In 2006 he won a Nickelodeon Kids Choice Award and in 2008 he won the Cartoomics prize "Beyond Comics." His works have been published all over the globe. In his spare time, Mr. Stilton collects antique cheese rinds.