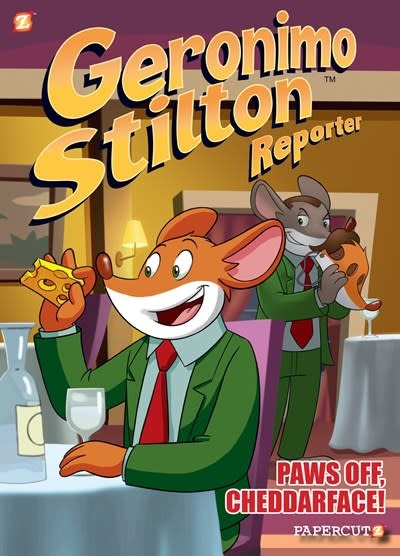 Geronimo Stilton has turned moldy and joined the dark side?!

Breaking news! Geronimo Stilton publicly insults famous Chef Ricardo on his cheese selection in his own restaurant. Geronimo Stilton cuts ahead of an an elderly woman in line. Geronimo Stilton steals ice cream from a little girl. All around New Mouse City, the once upstanding Editor-in-Chief of The Rodent’s Gazette is wreaking havoc. Could Geronimo be suffering amnesia? Is he mind controlled? Or has he finally joined the dark side? Only Benjamin, Thea, and Trap can clear the Stilton name!

Born in New Mouse City, Mouse Island, GERONIMO STILTON is Rattus Emeritus of Mousomorphic Literature and of Neo-Ratonic Comparative Philosophy. He is the director of The Rodent's Gazette, New Mouse City's most widely read daily newspaper. In 2006 he won a Nickelodeon Kids Choice Award and in 2008 he won the Cartoomics prize "Beyond Comics." His works have been published all over the globe. In his spare time, Mr. Stilton collects antique cheese rinds.